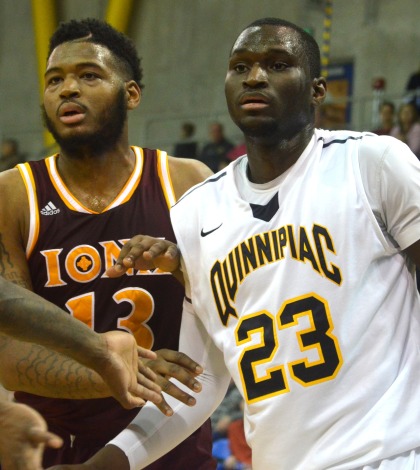 The Quinnipiac men’s basketball team fell to conference rival Iona in a tightly contested battle. Iona, the conference’s best team at 14-2 in the MAAC, squeaked by the Bobcats with a final score of 60-57.

The loss is Quinnipiac’s second loss to Iona this season, as they fell to the Gaels 81-73 on Jan. 6 in New Rochelle. The Bobcats did, however, hold the high powered Iona offense to just 60 points.

“I’m really proud of our guys, I’m really proud of how they played,” Quinnipiac head coach Tom Moore said. “They played the way we wanted them to play. The ball just didn’t go in for us, Iona turned up their defensive pressure in the second half when they needed to.”

Moore added that he felt good about the way his team, despite the loss.

“We’ve come a long way as a team since the last time we played these guys, and I’m proud of that, but it’s a bitter pill to swallow to lose tonight because it was so close,” Moore said.

“It just wasn’t our day from the perimeter.” Moore said. “We played them the way we wanted to, We just didn’t make enough shots.”

Quinnipiac held Iona to 31.5 percent from the floor, a far cry from Iona’s season average of 49.4 percent mark.

“We played team defense and it worked, well but the ball just didn’t go in for us,” freshman forward Chaise Daniels said.

“I would doubt they’ve had a night where they’ve ever shot less than 31 percent,” Moore said. “We were where we wanted to be, we made good decisions, we played the defenses well.”

Chaise Daniels led the Bobcats in the loss, scoring 12 points and nine rebounds on the night.

“I try to play with the most confidence on the court, and I feel like no one can stop me,” Daniels said.

“He works hard every day in practice,” Moore said of Daniels. “He’s getting so much better and this was another huge step in his development. He’s got size, and he’s fearless. He has no back down in him.”

Daniels was often matched up against Iona’s David Laury, who leads the MAAC in scoring with 20.6 points per game.

The Bobcats fall to 8-8 in the MAAC and 14-11 overall after the loss. Quinnipiac will look to bounce back on Thursday night when they visit conference foe Rider.