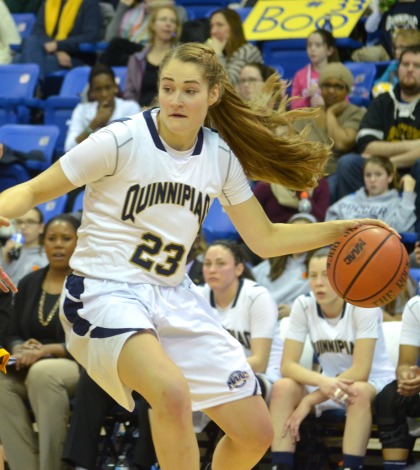 The Quinnipiac women’s basketball team’s 13-game winning streak and undefeated record in the MAAC will live to see another day, as the Bobcats bested Canisius 88-85 in overtime on Sunday afternoon at the TD Bank Sports Center.

With conference play in full swing, Quinnipiac entered this past week with games against Iona (10-5 in MAAC), at Marist (12-4 in MAAC) and home against Canisius (6-9 in MAAC).

The Bobcats won the first two matchups handily, but Canisius gave Quinnipiac everything it had.

Down 77-74 with less than ten seconds on the clock, Quinnipiac senior Jasmine Martin buried a 3-pointer, her third of the game, to send things into the overtime. Quinnipiac went on to win by the final score of 88-85 in the extra period.

In the overtime, Nikoline Ostergaard sank four critical free throws to finish her day with 18 points, shooting 10-12 from the foul line.

“It wasn’t our best effort,” Quinnipiac head coach Tricia Fabbri said. “I thought we were a half step slow defensively. We turned them over right out of the gate but weren’t able to capitalize.”

Coming into play Canisius was shooting 37.5 percent from 3-point range. In Sunday’s battle, they shot just over 61 percent from the 3-point line (11-18). In the second half, the Golden Griffins nailed seven out of eight attempts from downtown.

Behind Val Driscoll’s 10 early points, Quinnipiac took a 33-20 lead over Canisius with 4:11 left in the first half. Canisius’ Crystal Porter sparked a 10-3 run, however, trimming the lead to just six entering halftime.

“We gave [Canisius] a belief,” Fabbri said. “When you give a team confidence, they were able to do everything.”

Canisius eventually pulled in front of the Bobcats by four points with 1:27 remaining in regulation.

“Canisius plays so hard all the time,” Fabbri said. “[Tiahana] Mills is dangerous with the ball, [Kalya] Hoohuli is a great offensive player, whether it’s off the drive or off the 3-pointer. Her shot was on today. Porter is crafty with the ball. We had our hands full.”

Coming off a Canisius layup, Gillian Abshire moved the ball down the floor, dumping the ball to Martin, then setting a screen to give her an open look. Martin connected, tying the game at 75 and sending it into overtime.

With the victory, Quinnipiac needs only one more victory to win to claim the top spot in the MAAC. The Bobcats are now 15-0 in MAAC play.

Up next, Quinnipiac rounds out its home schedule with a matchup against Saint Peter’s on Sunday.