Struggling in the snow 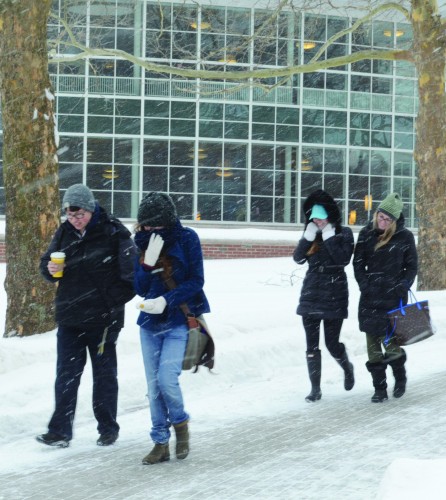 Despite several inches of snow and slippery road conditions, the university opted for a two-hour delay rather than cancelling classes Monday.

English professor Ken Cormier believes the administration is highly concerned about the safety of students when considering cancelling classes.

“It is my understanding that Quinnipiac takes school closures very seriously and that classes are canceled only when extreme weather conditions put commuters (such as faculty, staff and students living off campus) at risk of harm,” Cormier said in an email. “Hardworking faculty and staff do their utmost to ensure that course schedules continue to move forward and that learning goals are met.”

However, some students like junior Marissa Faretta think the administration put students in danger on Monday.

“There are so many commuters and students who live off campus–myself being one of them–as well as students who have to drive to the North Haven campus as well,” Faretta said. “This is putting not only the students in danger, but also the teachers that have to commute to work as well. It doesn’t matter if we’ve already missed so many Monday classes, our safety should be more important.”

Students have yet to have a full day of Monday classes this semester. The university was closed on Monday during the first week of classes for Martin Luther King Jr. Day. Afternoon and evening classes were cancelled on Monday because of a snowstorm during the second week of classes. There was another snow day last Monday.

According to junior Rob Ciambra, the university is more concerned with the cancellations of Monday classes, than the safety of commuters like himself.

“I understand that they were probably upset about how many Monday classes were cancelled already and they didn’t want to do that again for the third week in a row,” Ciambra said. “But at the same time I think they really need to take into account the safety of the faculty and the students…It is unacceptable that they think the class is more important at this point because the weather… has more of an effect than they probably imagined.”

He explained how Quinnipiac, regarding cancellations, should follow what the Hamden schools do instead of making its own decision at 5 a.m.

Ciambra also said this is not the first time that the university has put students at risk due to weather conditions.

“A similar situation happened last year around this time actually when there was another bad snow storm when they didn’t cancel at all,” he said. “I wasn’t able to get out of my driveway and ended up missing two classes. They need to take into consideration the safety of the students and faculty.”

With students slipping and falling along Bobcat Way, Ciambra said the QU News emails stating all three Quinnipiac campuses are in excellent condition, which students received during a previous snowstorm, are not assuring.

“It makes me question the conditions of the campus when I’m not here and everyone who is on campus still says its not safe for them to walk to their classes,” Ciambra said. “It just makes me question what they are doing for students who live on campus, let alone a commuter like myself.”

This week, some students have taken it upon themselves to stay safe, according to Assistant Professor of Marketing and Advertising Erika Paulson, who had almost a third of her class absent on Monday.

“I am glad to see students evaluating their own situations and putting safety first,” Paulson said. “For example, I have had 11 students email me to report they will be unable to make it to my 3 p.m. class [on Monday]–out of 35 students–due to bad road conditions.”

Paulson said she has scheduled a make-up class to compensate for the loss of class time due to the past snowstorms this semester. While the lost time has affected her students’ progress on a major project, she thinks the snow days were necessary and important in ensuring the safety of students and faculty.

As classes have been disrupted due to the weekly cancellations, delayed openings and early closings, many professors are teaching their class through Blackboard to ensure students can keep up with the syllabus.

Freshman Anthony Arcamone, who had his once-a-week Monday class for the first time two days ago, said his law professor is doing just that.

“My professors have been putting up assignments on Blackboard so if we don’t meet in class we can still keep up with our work,” Arcamone said, “But the snow days make it harder to learn new material and ask questions.”

Although some say learning through Blackboard may be difficult and inconvenient, others say it is worth the trouble. Professor Fodei Batty had a student get into an accident as a result of the slippery conditions Monday morning.

“On the way to campus [Monday] morning, the student reported that he hit a snow bank and a garbage can and got off the road which resulted in damages to his fender. Nothing major, but an accident nonetheless,” Batty said.

Freshman Michael Green hopes the university doesn’t make the mistake of having class the next time there is a snowstorm.

“I think there should have been a snowday on Monday,” Green said. “The administration put students and faculty in danger, and many professors cancelled class anyways due to the treacherous conditions. Hopefully, in the future, the administration will take more precautions to ensure the utmost safety for everyone.”