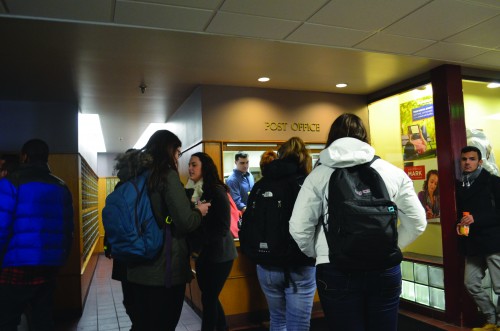 The longest line of students waiting outside the post office to pick up a package was always on Valentine’s Day. The first time I noticed this was three and half years ago when I was a freshman at Quinnipiac. Then, when I was a sophomore that line grew even more and everyone was like, “Gee whiz, this is the longest the line has ever been!”

But now I am here to tell you that the line of students waiting outside the post office on Mount Carmel has gotten exponentially worse. It’s so bad that it feels like every day is Valentine’s Day since there are always 20 to 30 people there at any given time.

I live on York Hill, so my mail is sent to the York Hill post office instead. This is fine and dandy with me because the longest line I’ve ever been in up there had two—maybe three—people ahead of me. What’s going on here?

For starters, there are way more students living on Mount Carmel in comparison to York Hill, but still. You would think something would have been done to curb this problem of a never-ending line. Perhaps an extension in the Mount Carmel post office hours would help.

If I was an underclassman, I’d be beyond annoyed about always waiting in such a massive line. And as an upperclassman, it bothers me even more to have to weave around this line of students every time I’m trying to walk through the Carl Hansen Student Center.

It’s absurd and sadly, the line for the post office on Valentine’s Day is going to be ludicrous. All I can suggest is try to get there early. Good luck.