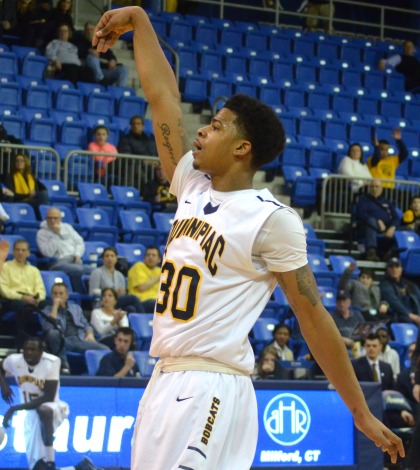 Heading into Thursday night’s game against Monmouth, Quinnipiac men’s basketball guard James Ford Jr. had scored in double figures in just two of the Bobcats’ 21 games so far this season.

And after a tough loss at Niagara on Sunday, the Bobcats bounced back in a major way, led by a breakout performance from Ford Jr.

The junior guard had his best game of the season, exploding for a career-high 18 points to lead Quinnipiac to a 72-52 victory over Monmouth at the TD Bank Sports Center.

“Tonight the shot was falling, and my teammates were just finding me,” Ford Jr. said. “I was just feeling it.”

“You’ll see a lot more of that [in the future], definitely. I’m confident enough to say that.”

With the win, the Bobcats improved to 12-10 on the season, and 6-7 in Metro Atlantic Athletic Conference play.

Ford made five of his first six shots, draining the first three 3-pointers he attempted.

“Especially if you’re hungry to move on drives from the weak side, or passes into [Ousmane Drame, Justin Harris or Chaise Daniels],” Moore said. “If you’re ready to move and get into their vision you can get an open shot, usually. James was hungry to move tonight.”

Moore also called Ford an “emotional focal point of the team,” saying that he’s been a big part of the team behind the scenes all year long.

Quinnipiac’s leading scorer Zaid Hearst, meanwhile, had an uncharacteristic game where he shot only 4-for-14 from the floor and recorded nine points – tied for his worst scoring output this season.

Senior guard Evan Conti came up the bench, though, and helped pick up some of the slack for Hearst by scoring 13 points, grabbing four rebounds and dishing out three assists.

“We’ve been putting too much pressure on [Zaid] to score,” Conti said. “I was just ready to catch and shoot tonight. We felt like we needed to be more aggressive, and help them [Zaid Hearst and Ousmane Drame] out.”

When 11:11 left int he second half, Monmouth built momentum and cut Quinnipiac’s lead to only eight points. Conti then drilled two-straight 3-pointers to keep the Hawks at bay.

Ousmane Drame had 11 points and 12 rebounds in the win, and recorded his 1000th career rebound on the way.

Quinnipiac is 34-7 during the month of February over the last six years, something Moore credited to Quinnipiac’s work effort.

“I think it’s the toughness and determination of the kids we have here,” Moore said. “They’re determined to work.”

Looking ahead, the Bobcats have a home game against Niagara at 1 p.m. at the TD Bank Sports Center.