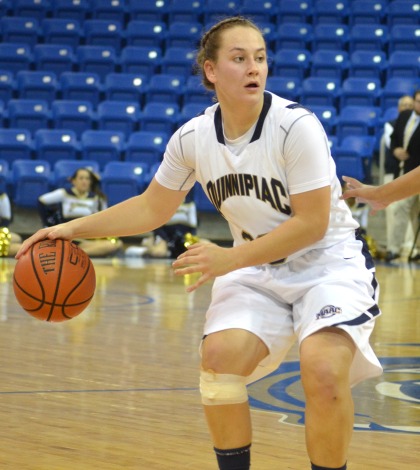 Here are some of the highlights from the day.

The Bobcats are 19-3 on the season and 11-0 in MAAC play, which is pleasing to Fabbri as the team chases another birth into the National Tournament.

Quinnipiac has been focused on getting back to the MAAC Tournament Championship since losing to Marist in last season’s tournament.

“We came into this year with really high expectations in what we wanted to achieve,” Fabbri said. “We do it one day at a time, just take care of business.”

The team has been balanced on both offense and defense, which has contributed to its success.

“We have a really talented team, we’re really unselfish,” Fabbri said. “We share the ball really well. Defensively, we’re really underrated in what we’re able to do on that end.”

The Bobcats routinely play 11 players deep, which is rare among college teams. Fabbri uses the “Gold-Rush” system, a substitution method that replaces the five players on the floor with five new players.

“We have the talent, the team and the players to accomplish our goals,” Fabbri said.
“Our second five has just been outstanding. They’re going up against the first-place team in the conference in practice.They’re growth and gaining valuable game-experience has just made them so much better.”

Along with being undefeated in the MAAC, the Bobcats are also undefeated at the TD Bank Sports Center this season, going 10-0 in Hamden.

Quinnipiac will play its next game at home on Saturday, when it squares off with Rider at 1 p.m.

“Everyone is comfortable at home,” Fabbri said. “We’ve got great community support and it’s fun to play in front of our fans.”