Rave: candy returns to the cafe 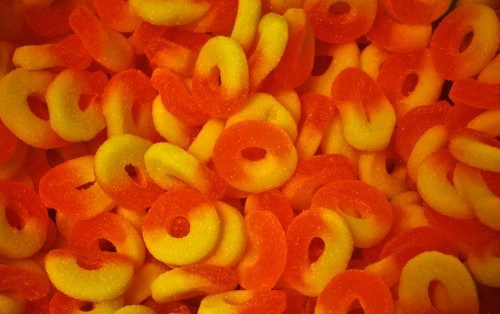 Candy connoisseurs rejoice: the cafe candy is back on campus.

Last semester the candy dispensers in the Mount Carmel cafe mysteriously disappeared without any notice or explanation. It was unclear whether Chartwells or an outside company implemented the removal, but when what seemed to be permanently stationed dispensers disappeared, students were saddened. Rumors surfaced about why the candy left the cafe including a bug infestation or budget cuts, but with no clear reason, students were unsure when the candy would return or if it would at all.

However, with the start of a new semester came new candy and a new location for the beloved candy dispensers, conveniently placed across from the salad bar. The house favorites including watermelon gummies, peach rings and chocolate covered pretzels returned to their respected dispensers and some students are hopeful this will remain for the rest of the school year.

Junior Ray Brumleve is among the students excited for the return of the candy dispensers, especially because it means he can get his favorite sour straws whenever he wants.

“I do love the sour straws, but I also just appreciate the candy in general because I believe everyone deserves a candy break while studying,” Brumleve said.

The removal obviously caused a bit of an uproar among students and the return of the candy has made students appreciate the candy dispensers as an after practice or late library session snack. The candy’s presence in the cafe is more than just candy; it adds a touch to the cafeteria, making it a little more comfortable at our home away from home.