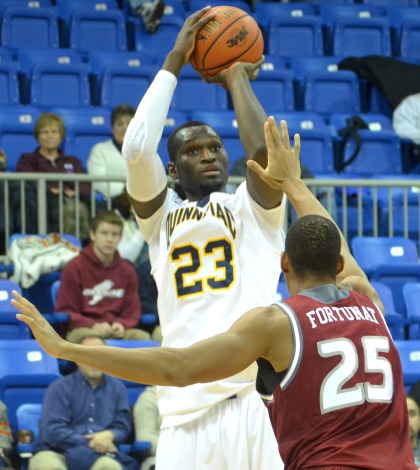 Ousmane Drame and Zaid Hearst are focused on their final run as members of the Quinnipiac men’s basketball team.

So focused, in fact, that they likely didn’t notice a few special people in attendance during Friday night’s game at the TD Bank Sports Center.

Professional scouts Joe Meade of the Utah Jazz and Rob Jackson of the San Antonio Spurs were at the 73-59 win over Manhattan, according to Quinnipiac Sports Information. They were there to scout Drame and Hearst, among others.

In addition, Quinnipiac anticipates Khalid Green of the Brooklyn Nets to attend the Feb. 15 game against Iona.

Hearst and Drame have led the Bobcats to an 11-8 overall record this season, 5-5 in Metro Atlantic Athletic Conference play. And though the Bobcats are in seventh place in the conference, only two wins separate them from first-place foes Iona and Manhattan.

Based on that premise, the very notion of what lies ahead still likely remains an afterthought for the senior duo—considering the fact that they still have so much to accomplish in Hamden.

So what do we make out of this? Two Division I basketball players are being scouted by NBA talent evaluators. What’s the big deal?

The news is that a few of Tom Moore’s players are legitimately being looked at by NBA scouts, and any participation in league activities would be another first for the program.

Drame likely has the best chance at cracking the NBA. The 6-foot-9, 225-pound senior from Boston has a unique skillset. Drame’s length, touch around the rim and ability to compete with any big man in the country when he’s playing with a high energy level is a coveted set of attributes any basketball team would like to have.

Drame is averaging 14.2 points per game to go along with 10.9 rebounds and 3.0 blocks on the season. And with 12 points and 19 rebounds Friday, Drame recorded his 14th double double of the season—which is tied for No. 1 in the nation.

Yet, the inconsistencies that have plagued Drame might provide a cause for concern for prospective employers.

After starting the first 12 games of the season, Moore elected to bench Drame following a 66-60 loss against Saint Peter’s on Jan. 2 where the senior had just seven points and seven rebounds.

During his most recent stretch, however, Drame’s potential as a basketball player for those closely watching was evident.

In seven games since being taken out of the starting lineup, he’s averaging 14.2 points, 12.2 rebounds and 2.5 blocks per contest while shooting just more than 46 percent from the field. Drame has also tallied six-straight double-doubles.

“He’s a complex kid, he’s a stubborn kid, he’s a bright kid, he’s a talented kid,” Moore said following Friday’s game against Manhattan. “But that’s inspiring, when he plays with that energy level. If his energy level is like that, the numbers will just follow.”

Then you have Hearst. The Bobcats’ captain averages a team-high 20.1 points to go along with 6.3 rebounds a game this season. He’s scored 20 or more points in 10 of Quinnipiac’s 19 games.

At 6-foot-4, Hearst combine’s his solid shooting touch with his rare ability to balance himself while in the air when scoring most of his points.

“I heard so much about him and how good of a player he was so I took a challenge just to shut him down,” Hearst said after the game. “We knew that [Payton] was the heart and soul of the team.”

Not to be outdone by himself, Hearst then held Manhattan’s Shane Richards scoreless in Friday’s win. With 12.8 points per game, Richards is the Jaspers second-highest scorer on the year.

That being said, it’s easy to see why some talent evaluators like both Ousmane Drame and Zaid Hearst this season.

If either manages to stumble upon a chance at playing professional basketball in the NBA, the program will be irrevocably changed.