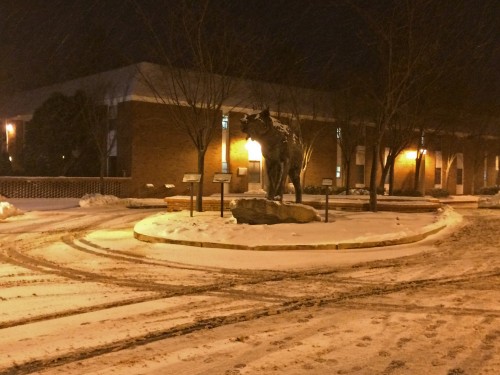 The Emergency Management Team will meet later this evening to discuss whether or not to hold classes on Tuesday, according to administration.

This group, made up of various administrators across campus, already met twice on Monday to monitor weather reports and coordinate how the university should deal with the oncoming blizzard, which forecasters predict could drop three feet of snow in some parts of the state.

“We are operating on the best information that we receive and the idea is to make sure that the students are in fact safe,” Chief of Public Safety David Barger said.

Some university employees, including facilities staff and Barger himself, will be staying on campus overnight. The university set up mattresses in the Athletic Center for staff who will be spending the blizzard working, Barger said.

Facilities will focus first on clearing snow at the entrances to residence halls so students can get in and out of their rooms. Then, the staff will shovel other places, such as Bobcat Way.

“They keep removing snow but there comes a point where it becomes counterproductive if the wind starts to blow at 50 or 60 miles per hour,” Barger said. “There’s no sense in clearing off the sidewalks because they’re just going to get covered back up again.”

The university made the decision early this morning to cancel classes after noon on Monday because of the impending storm. The Emergency Management Team spoke over the weekend via conference calls and recommended to Executive Vice President and Provost Mark Thompson that he cancel class.

“A lot of thought went into cancelling the classes at noon today,” Barger said. “And the whole idea was when we originally got the weather report [the snow] would be starting some time before noon…We have to be mindful of those students taking evening classes and the commuters, so we have to look at the whole picture.”

“We have to look at what the road conditions are currently and what we think that they’re going to be based on the best information,” Barger said. “It’s not always worrying about the shuttle drivers because they’re all professionals, but it’s worrying about those other drivers on the road who may collide with our shuttles.”

If classes are cancelled tomorrow, Barger said the shuttles will likely not run. But he said this all depends on the weather.

Stay with The Chronicle for updates. What are you doing during the storm? Send your photos to [email protected] or use #quchronicle on social media. You may be featured in print or online.