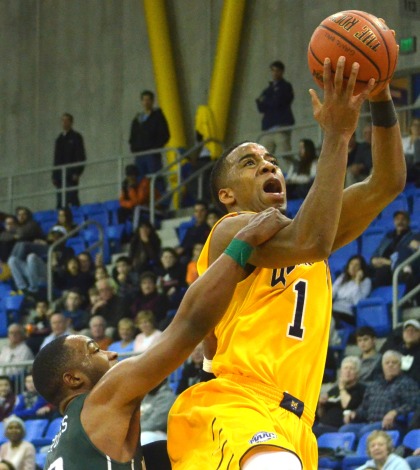 In its first nationally-televised game of the season, the Quinnipiac men’s basketball team looked to leave a strong impression on the fans watching across the country.

And led by big games from Zaid Hearst and Ousmane Drame, the Bobcats scored big in a conference win over Manhattan.

In front of a sold-out crowd at the TD Bank Sports Center in Hamden, Quinnipiac’s defeated Manhattan 73-59 Friday night on ESPNU.

“That was a big win against an opponent we have a lot of respect for,” Moore said. “We have got a lot of guys sacrificing right now, so to get wins over respected opponents is important.”

The double-double was Drame’s 14th of the season, which is tied for tops in the nation.

“[Ous] was great, he’s got everything,” Quinnipiac head coach Tom Moore said. “He is in a good place right now. He’s not perfect, but when he plays with that energy level it’s inspiring. If his energy level is like that, his numbers will always follow.”

Emmy Andujar recorded 25 points and 12 rebounds for Manhattan, while Ashton Pankey had 18 points on the night.

The Jaspers remained in a smothering press defense on Quinnipiac all night, keeping the game close until the final minutes.

“We made a few dumb turnovers early in the second half trying to beat the press,” Hearst said. “But we did a good job adjusting, and figuring out how to beat their press and put up some points.”

After the game, Moore also spoke of how important point guard Kasim Chandler was in beating the Jaspers’ press.

“I know Kaz had the five turnovers but I loved his demeanor. We don’t win tonight if we don’t have his confidence in the full court,” Moore said. “You come at that guy in the open court, and he’s getting by you.”

Freshman Chaise Daniels contributed for the Bobcats with 11 points and three big blocks. Senior Evan Conti also added 12 points of his own off of the bench.

“Evan was great, you talk about a confident kid who never loses his will,” Moore said. “He’s had a tough stretch. He lost his starting spot, his minutes have been reduced, and I have him on a short leash, but he was ready in big spots.”

The Bobcats, now 11-8 on the season, square off with MAAC rivals Canisus (11-7) on Friday at the Koessler Athletic Center in Buffalo N.Y.