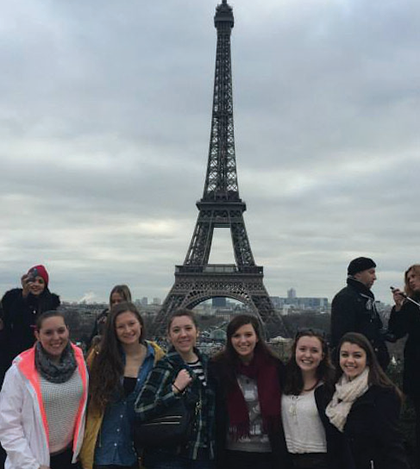 It was 1 p.m. in Paris on Jan. 7, and Chelsey Tahan had just finished FaceTiming her parents when she heard about a terrorist attack that had occurred several miles away.

At 11:30 that morning, two Muslim gunmen named Saïd and Chérif Kouachi had entered the headquarters of Charlie Hebdo, a French satirical magazine, killing 12 people and injuring four. The “execution style” shooting lasted between five to 10 minutes and was triggered by controversial jokes the magazine had published about Islamic leaders.

The attacks, in addition to two more shootings and a hostage crisis that occurred in Paris over the next two days, are the deadliest acts of terrorism in France since the 1961 Vitry-Le-François train bombing, which killed 28 people and injured more than 100.

A junior at QU, Tahan was part of a QU301 class called “Global Communication through Cinema” that traveled to Paris for 10 days. The 14 students had spent their time touring Paris and seeing French films until the attack occurred.

“It was a wonderful experience before the attack,” said junior Leah Walter, another member of the QU301 class. “The culture there is so much different compared to the U.S. The atmosphere in Paris was full of life and I loved it.”

However, that lively atmosphere changed once the students learned of the shooting at the Charlie Hebdo offices.

Tahan explained that the class immediately met in the lobby of the hostel where they were staying–the FIAP Jean Monnet. Many students were checking the news on their phones or receiving anxious messages from their friends and family.

“We were told that our activities for the day had been canceled, and we were to stay in the hostel all day and were not allowed to go outside,” Tahan said. “I got emails from the Department of State and the United States Embassy in Paris briefing me about the situation and giving tips on how to behave out in the city, so as not to draw attention to the fact that I was American.”

Besides the email briefing, it was difficult for the students to receive more information about the situation because all news broadcasts were in French. As a result, they remained in constant contact with their worried families in the days following the attacks.

“My parents were freaking out,” Tahan said. “Earlier in the semester, there were ISIS attacks all over the news and my parents considered pulling me out of the Paris trip . . . but I didn’t see any reason to think I would be affected by it. When the attacks happened, all I could think was, ‘What were the chances?’”

Raymond Foery, a professor of communications in charge of the QU301 class, worked hard to reassure students’ parents because he knew they would be “extremely worried.” The Global Engagement Department also kept in touch with Foery, the students and their parents.

“I should stress that we were never in any real danger,” Foery said. “This was an isolated attack on a specific target; it was not a mass attack on tourists or even on the French public. I have always thought of Paris as a safe city–I still do.”

Junior Megan Alderman-Person agreed with Foery, saying that she felt very secure during the attacks.

“We were told by our international coordinators at our hostel that the security in Paris was at the highest level, so I felt pretty safe,” Alderman-Person said. “From our hostel, it didn’t seem like much was wrong; people were walking around outside and it looked like a normal day.”

Director for Global Education Andrea Hogan said she can understand how an incident like this could make students worried about studying abroad. However, she said emergency situations can occur anywhere.

“It’s important to put an attack like the one in Paris in perspective,” Hogan said in an email. “The Boston marathon bombing didn’t stop students from studying at BU or Harvard. I also think some students study abroad unaware of what is going in in their host country. It’s important for the student to be engaged and informed about local news and culture before deciding to study in a different country.”

Hogan said none of the abroad trips have been cancelled for the spring, but students traveling should be cautious.

“We will continue to evaluate department of state recommendations for safety of Americans abroad,” she said in an email. “We continue to remind all students to stay vigilant and abide by local safety warnings and advice which is provided to them by the affiliate programs.”

The day after the lockdown, students were allowed to either stay in the hostel or travel in a group to the nearby Cinematheque, a museum devoted to film history.

“We were cautious throughout the rest of the trip because of the unknown hostage count and location of suspects at large,” senior Jessica Sola said. “However, there was always a sense of security and awareness because of the strong police and military presence in Paris.”

A National Day of Mourning was held on Jan. 8, when thousands of French citizens held candlelight vigils or marched peacefully down the streets of Paris proclaiming, “Not afraid.”

Sola said that the experience was “eye-opening.”

“I purposely placed myself on the Champs Élysées, the busiest street in Paris, and witnessed how the Parisians reacted to such tragedy,” Sola said. “I felt a somber, respectful atmosphere. [Later], when my family and I were traveling by train to the South of France, we saw a very large group of people marching in honor of Charlie.”

In America, similar protests were occurring. Crowds of American citizens held signs proclaiming “Je Suis Charlie,” translating to “I Am Charlie,” in order to declare their right to the freedom of speech. The phrase quickly gained support and became a popular hashtag on social media websites.

“The fact that this was an attack on journalists, attack on our free press, also underscores the degree to which these terrorists fear freedom–of speech and freedom of the press,” he said. “But the one thing that I’m very confident about is that the values that we share with the French people, a belief–a universal belief in the freedom of expression, is something that can’t be silenced because of the senseless violence of the few.”
While some students wished to participate in the marches in France, Professor Foery instead devoted class time to a discussion of the terrorist attacks and the issue of free speech, which many students argued is a basic human right.

“Free speech is a right we often take for granted, but we would not be the country we are today without it,” Tahan said. “Somebody with a gun and a bad attitude does not have the right to take our freedom of speech away, and the French people had every right to voice their opinions about it.”