Enterprise on the rise 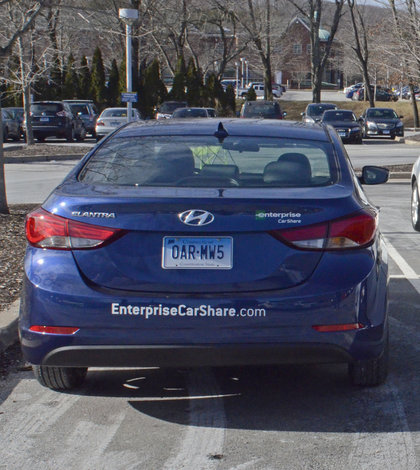 Students can begin using the new Enterprise rental cars during the spring 2015 semester.

Enterprise has been working closely with several branches at Quinnipiac to get its Car Share program approved.
According to an Enterprise Car Share spokesperson, the program is primarily targeting students who are unable to have cars on campus, such as freshmen.

“We collaborated with Quinnipiac University to launch Enterprise Car Share, providing students who do not have a vehicle on campus with a low-cost, convenient transportation solution,” the spokesperson said. “With the addition to Enterprise Car Share, students now have the freedom to rent a vehicle 24 hours a days, seven days a week at a low hourly rate.”

New members will receive $35 in driving credits and $5 rates until March 15, according to the Enterprise Car Share spokesperson. New members will also get a discounted annual membership fee of $25 and the $20 application fee will be waived. After March 15, the hourly rate will go back to the standard rate of $9 per hour.

Sophomore class president Christopher Desilets was one of the first Student Government Association (SGA) members informed about the Enterprise Car Share program. He said students had access to the two Enterprise cars starting Jan. 20, 2015. If there is a strong demand, Desilets said SGA and Enterprise have already agreed to increase the number of rental cars to four.

The cars were used on their first day. Freshman Lindsay Paixao and her friends rented the cars Tuesday night to go to the store. Paixao said this was much better than waiting in the cold for the shuttles.

Sophomore Gabriella Padilla also does not have a car on campus and said she would consider using the Enterprise cars.

“Since I don’t have my car on campus, it’d be nice,” she said. “Probably just to run to the store or something to get some stuff that I might need.”

Cassidy Fitzgerald, a class of 2017 representative, was recently a brand ambassador intern with Enterprise. As an intern, her job was to increase sign up with the Car Share program. With her position, Fitzgerald will implement social media posts and campus events to spread the word about the program to interested students.

In order to use one of the rental cars, students must complete a sign-up process to ensure safe drivers are getting behind the wheel. Desilets said the process is similar to the one already implemented at Quinnipiac and works quickly.

“Once a student signs up, Enterprise will mail them a membership card, like a Q-Card,” he said. “The reservation process is very similar to [booking] a study room in the library, just through Enterprise’s website.”

The Enterprise Car Share spokesperson said an email confirmation will be sent to students once their membership has been approved. Shortly after, they will receive a membership card and welcome brochure in the mail. The information on the welcome brochure- such as their member ID number–will be used for their log in to reserve a vehicle.

After a student has been approved and received their credentials for the program, the Enterprise Car Share spokesperson said they can log into the system from their phone, tablet or computer. From there, students will choose the vehicle and length of time they wish to use it.

The spokesperson said after a student reserves a vehicle they are ready to drive.

“They go to the vehicle’s designated parking spot, wave their membership card over a sensor on the windshield and the car unlocks and the keys are located inside,” the spokesperson said. “The return process is just as simple. Members return the vehicle to its designated parking space, leave the keys in the car and wave their membership card over the sensor on the windshield to close the rental.”

As for prices for the program, the Enterprise Car Share spokesperson said members will be charged hourly rates, which will include fuel and up to 200 miles for each day.

The spokesperson said when a student needs to refuel the car, there will be a fuel card located in the glove box of each rental car. At the gas pump, the student uses the gas card the same they way they would use a debit card and enter their fuel pin and mileage, the spokesperson said.

In order to ensure the safety of the drivers, Enterprise is enforcing a background check on the students signing up to rent one of the cars, according to Desilets and the Enterprise spokesperson.

“Enterprise will examine the driving record of any student that wishes to sign up,” Desilets said. “Any student under 21 also needs a parent signature to sign up.”

Desilets said students must hold themselves accountable and should know better than to endanger themselves or others while using the rental cars.