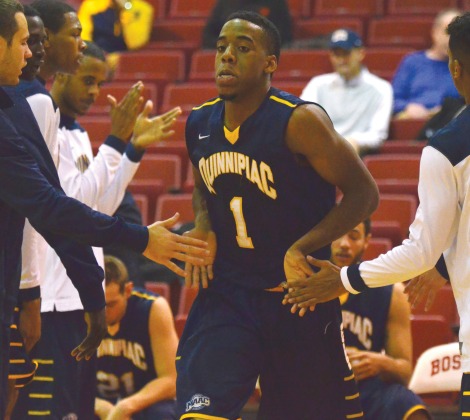 For men’s basketball guard Zaid Hearst, the road to becoming captain of a Division I basketball team has been a long and tough journey.

Growing up in a single-parent household in Bethesda, Md., Hearst was raised by his older brother, Geoffrey, and his mother, Tanya, who worked multiple jobs to support the family.

“My life in Maryland was a humbling experience,” Hearst said.

Hearst grew up without his father in his life. Hearst says his father leaving didn’t have an impact on him growing up.

“My mother was both parents in one,” Hearst said. “She taught me how to act and how it’s important to always do the right thing.”

Even without a father in the picture, Hearst is able to recall great memories with his mother and brother.

“My brother always brings up the story of how bad of a kid I was growing up in my toddler years,” Hearst said. “He said I threw my toy fire truck at his face and he was the one who got in trouble. But every second I spend with them is a memory.”

But the memories weren’t always perfect in the Hearst household. With Tanya working multiple jobs to provide for the family, it was hard for Hearst to watch his mother struggle. For a period of time, he says, Tanya was working on a broken foot and she didn’t realize because the pain didn’t matter to her. She had to provide for Hearst and his brother. Hearst says his mother’s work ethic inspired him.

“Where I get my fire from is her,” Hearst explained. “She is the reason why I work hard because I see her every day working hard.”

Hearst took that fire and passion, and put it to use on the basketball court.

“I started off as a center,” he said. “Over time, in public school, I developed my game and became a power forward.”

As a freshman in high school, he was taller than most kids on the team. He had to learn to play the game of basketball as a big man.

After a couple years in the public school system, though, Hearst realized that the other kids had grown taller than him. This forced Hearst to transition to a guard position, a completely different experience.

Hearst was faced with a decision: either continue to play as a forward or learn the game of basketball all over again from a guard’s perspective. If he were to do this, he would have to leave his mother and brother behind to go to a prep school so that he could advance his skills at a quicker pace.

“It was a big jump,” Hearst said, “but I knew the decision was going to help my future in regards to getting offers from colleges. Plus my mom was ready for me to get out the house already.”

After transferring to the Salisbury School in Connecticut, Hearst started to change and expand his game. He worked hard to become an effective do-it-all guard.

“When I went to prep school I became more of a small forward than a guard,” Hearst said. “Now, here in college, I’m a guard. I’m always trying to play all positions.”

His statistics his junior year showed how hard Hearst worked to become an effective guard. He averaged 18.7 points, 11.1 rebounds, 4.4 assists and 1.9 steals per game in his first full year playing as a guard at Salisbury. By the time he was a senior, Hearst was ranked the eighth-best player in his class in Connecticut by the New England Recruiting Report.

His stats started to attract many Division I coaches and scouts to his high school games and AAU events. Among those interested was Quinnipiac head coach Tom Moore.

“We were aware of him because of his AAU coach [James Lee of Mid-Atlantic Select]. He put us on the radar,” Moore said. “I went to see him at an AAU event in April during his junior year and was impressed with him. So I went and saw him a lot in July before his senior year.”

Moore was immediately impressed with Hearst’s size and toughness. The Bobcats’ coach said that, when he saw Hearst play, he saw a kid who played with fire in his heart. A player who didn’t back down from any competition. Moore knew he had to add him to his program.

“I liked his body and frame. He looked like he would be a great NEC wing player,” Moore said. “Little did I know is that he turned out to be a great MAAC guard or forward, which is an even higher compliment.”

Hearst verbally committed to Quinnipiac the summer prior to his senior year. At the time, he had already received more than nine Division I offers from programs such as Temple University, Boston College and American University. Hearst ultimately chose Quinnipiac after an official visit to the campus.

“I saw how beautiful the campus was,” Hearst said. “Also, Deontay Twyman, a player who graduated before I got there and was from where I was, told me how great a program it is. He told me how great the coaching staff was and that it was different from any college.”

In the fall of 2011, Hearst enrolled at Quinnipiac with a class of seven other freshman but still found ways to stand out immediately. He separated himself from the pack early, earning quality minutes as a freshman based on his work ethic and an injury to then-senior Garvey Young.

“Young separated his shoulder so the door was open, and he ran with it since then,” Moore said. “He’s an opportunist because he works hard. He has the best work ethic of anyone in our program.”

Hearst had an efficient season with the Bobcats in his freshman year. He played in every game while averaging seven points, four rebounds and one assist per game while shooting 44 percent from the field.

But Hearst’s first season wasn’t about producing eye-popping numbers, it was more about learning from the team’s star senior guard James Johnson, who finished his career at No. 7 on Quinnipiac’s all-time scoring list.

“He showed me how it is when you work really hard to perfect your craft and how to truly become a leader,” Hearst said of Johnson. “I was his shadow. When he left, he told me that this would be my program if I continue to do the things that he did.”

Eventually, the program would indeed be his. Over the next two years, Hearst asserted himself as team leader, which caught the eye of his coaches and teammates.

“His will to get better and win games and make sacrifices has grown over the years,” said Evan Conti, who has been Hearst’s teammate for four years. “At first he was leaning on James Johnson, but the older he got the higher the standards he set for the team and himself to be successful.”

Before this season, Moore decided to make a decision he hasn’t made in his previous seven years of being a head coach at Quinnipiac. He decided to name a captain for the team, and that player was Zaid Hearst.

“He’s got more perspective now. He handles losses better now. He doesn’t get as high on the wins and low on the losses,” Moore said. “He also takes criticism better. He got over that hurdle his junior year.”

His teammates knew it was only a matter of time before Hearst was named captain.

Moore has had some great players and leaders pass through his program during his tenure as head coach for the Bobcats. He has coached players such as James Johnson, Justin Rutty, Dave Johnson and Ike Izotam just to name a few. But only Hearst has been named team captain by Moore at Quinnipiac.

“Zaid is the most complete package I’ve had since I’ve been here,” Moore said. “Zaid is the most complete package we have ever had in this program. His talent, commitment to winning, and his year round work ethic. There is just not a better example for the five freshman this year to watch and try to emulate as well as the sophomores who came in last year.”

Hearst has embraced being elected the leader of the team. He knows his hard work and leadership has earned him the title. He has never been involved in an incident off the court and is a leader in the classroom.

“I was excited and nervous. Being captain is a big title; it’s a lot of pressure,” Hearst said. “It didn’t change my approach to the season. I’m always going to want to lead my team and keep a winning attitude as well as help the young guys out.”

And in his first game as captain, the Bobcats home opener for the 2014-15 season as part of the CT 6 Classic, Hearst led the Bobcats past cross-town rival Yale.

“I knew there was a big rivalry between Yale and Quinnipiac,” Hearst said. “I knew how great of a team they were and I wasn’t going to just let them come in our place and beat us.”

Hearst put up a career-high 34 points, 11 rebounds and five assists in a thrilling double-overtime win at home.

“It was just my night,” he said. “Shots were falling for me and a lot of our team and we pulled out a heartfelt win.”

Even Moore has been surprised at the production he’s gotten out of his leader.

Hearst currently sits at 1,397 career points at Quinnipiac, which is good for 16th best all-time in the program. But he isn’t focused on how many points he finishes his career with. He has a different goal in mind.

“When I leave here I want to be remembered as a winner,” Hearst said, “As the guy that led this team to the NCAA tournament. There have been a lot of guys before me that haven’t gotten us there, but I want to be that guy.”