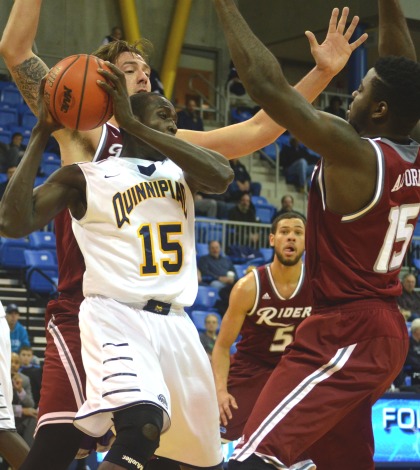 The Bobcats shot 29 percent from the floor, though, and were defeated by Rider 56-53 at the TD Bank Sports Center.

Quinnipiac got off to a slow start. The Bobcats went into halftime shooting 24 percent from the field and trailing 24-21.

“We had will, toughness, and belief but a lot of guys were frustrated on how we played on offense,” Moore said. “I just tried to keep them upbeat and positive.”

In the second half, the Bobcats shot 34 percent from the floor and kept the game close, but were unable to pull away with the victory. Quinnipiac was led by captain Zaid Hearst, who finished with 17 points and nine rebounds. Senior big man Ousmane Drame added a double-double, as he finished with 15 points and 11 rebounds on the night.

“I thought [Ous] was tough and engaged,” Moore said. “He was in the battle all night and draws a lot of attention on offense.”

This was the first of four MAAC contests in eight days for the Bobcats.

“We have to hold our heads high and keep on working,” Moore said. “We will try to put this one behind us and start to prepare for the next game.”

With the loss, the Bobcats fall to 8-8 on the season and 2-5 in the MAAC. The Bobcats look to get back on track Sunday, when they travel to Marist. Tip-off is set for 3 p.m.