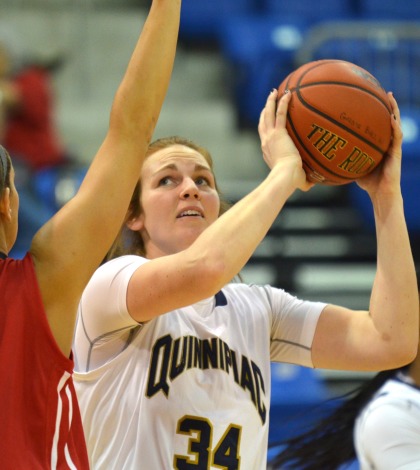 After shooting only 27.6 percent in the first 20 minutes of action, the Quinnipiac women’s basketball team entered halftime with only 25 points. Yet, due to holding visiting Fairfield to just 23.1 percent from the floor, the Bobcats held a 25-17 lead.

“To go in with a seven point lead, against a team like Fairfield who plays a slow style, it was almost like a 14-point lead,” Quinnipiac head coach Tricia Fabbri said.

So Fabbri encouraged her team to keep working hard, to keep pushing the ball, and simply, to go out and put the ball in the basket.

“We’re never going to get gun shy,” Fabbri said. “We feel confident. We want to play fast, we want to keep taking shots.”

The Bobcats responded to Fabbri’s encouraging words by doing just that. Quinnipiac scored 58 second-half points, including shooting 10-of-11 from 3-point range, and defeated the Stags by the final score of 83-43 at the TD Bank Sports Center Thursday evening.

“It was really a pretty basketball game for us to watch in the second 20 minutes,” Fabbri said.

The Bobcats opened up the second half on a 10-4 run. Samantha Guastella capped off the run by nailing a 3-pointer from the baseline, extending Quinnipiac’s lead to 14 with 17:09 left in the contest.

Guastella led the charge in the second half, netting 14 of her 20 points in the final stanza.

“I struggled a little but in the first half, I was rushing shots a little bit,” Guastella said. “My teammates really instilled confidence in me [at half time]. They told me to slow down and take my shots, and that’s really what I did in the second half.”

With 8:21 left in the second half, Guastella received the ball under the hoop on an inbounds play and laid it in to give her 20 points on the evening, and 1,000th career point.

“Sam has just had not only a fantastic career, but she’s been a part of that senior class that has done nothing but win and get to the NCAA Tournament,” Fabbri said. “She’s just so highly skilled, she plays so hard, never takes a play off, and she’s just got a great personality.”

With the win, the Bobcats improve to 7-0 in Metro Atlantic Athletic Conference play.