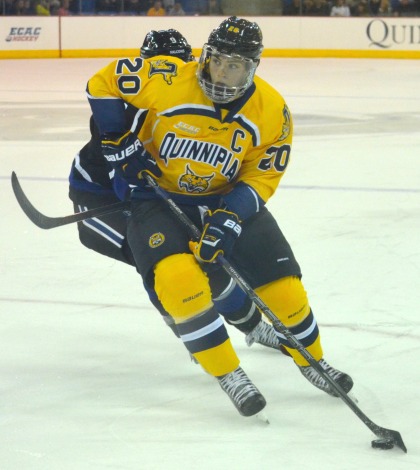 Opening up the second half of the season after a 21-day break, No. 14 Quinnipiac men’s ice hockey opened up a weekend of conference play against ECAC Hockey rival Princeton at the High Point Solutions Arena on Saturday afternoon.

Michael Garteig turned in a 19-save shutout, Matthew Peca and Bo Pieper scored, and the Bobcats defeated Princeton by the final score of 2-0.

“We are relieved to get the win tonight,” Quinnipiac head coach Rand Pecknold said. “I didn’t think it was our best effort. We had a little bit of rust after the three week layoff.”

Upon return from break, Pecknold said that he focused on mainly one thing before today’s game,

“When we came back, it was more getting them back in shape and getting their timing down,” Pecknold said. “You get pretty rusty when you take that long [time] off.”

Both teams struggled to score out of the gate. The Bobcats ultimately struck first as senior Matthew Peca scored with 4:19 remaining in the first period.

“It was a broken 3-on-2,” Peca said. “Landon’s pass missed me, so Sorren took it off the boards and no-look shot it at the net. It missed the net and I just put it in.”

The goal is Peca’s second of the season. In his first three seasons at Quinnipiac, the forward tallied 35 total goals.

“You’ll take them any way you can get them when you haven’t been scoring,” Peca said. “I’ll keep working hard and the bounces will come.”

“He has always been streaky in the four years he has been here,” Pecknold said. “It [goals] comes in bunches, we expect him to get it rolling for us.”

The Bobcats added to their lead when Pieper scored with 10:14 remaining in the second period. Like Peca, it was Pieper’s second goal of the season.

Garteig recorded his third shutout of the season in net, all of which have come against ECAC Hockey opponents. It’s the ninth clean slate of the senior’s career.

“I thought he was good tonight,” Pecknold said of Garteig. “He was confident and calm. When he needed to make saves he made them.”

Garteig said that, coming into the second half of the season, he wanted to become more consistent.

“As a goalie, it’s a good feeling to have knowing that you are on your game,” Garteig said. “My thing is trying to make sure I feel like that every night. I have to make sure I’m on every single night to give the team a chance to win.”

Quinnipiac back in action tomorrow as it travels to Princeton. The game will be nationally televised on ESPNU, with puck drop slated for 4 p.m.

“We will treat it like it’s any other game,” Pecknold said. “Every year we get a bunch of teams on television. We just need to be ready to play.”