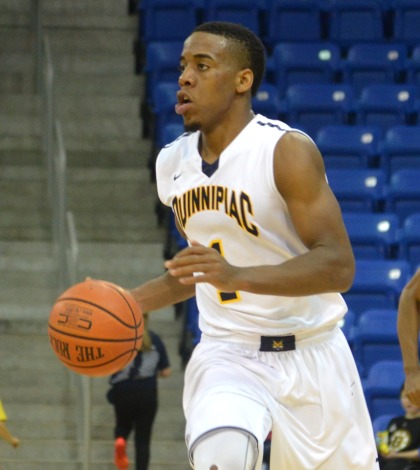 After defeating Lehigh at home on Thursday, the Quinnipiac men’s basketball team looked to start its first winning streak of the 2014-15 season when Pac-12 opponent Oregon State came into town.

The Bobcats, who had never beaten Oregon State entering play, did just that, defeating the Beavers 60-52 Sunday afternoon at the TD Bank Sports Center.

With the win, Quinnipiac earned its first ever win against a high-major program.

“It’s always good to get a win, but to get a win against a Pac-12 team is definitely a good feeling,” Quinnipiac senior Zaid Hearst said. “It shows everybody how good we can actually be in the long run.”

Oregon State entered the game with an 8-2 record, riding a five-game winning streak. Gary Payton II, son of NBA Hall of Fame inductee Gary Payton, lead the team in points, steals, rebounds and blocks prior to Sunday’s match in Hamden.

“I heard so much about him and how good of a player he was so I took a challenge just to shut him down,” Hearst said of Payton II.

Hearst held Payton, the 6-foot-3 guard, to zero points and just one rebound.

Hearst finished with a game-high 24 points in addition to shutting down Payton II.

“We knew that [Payton] was the heart and soul of the team,” Hearst said. “We knew if we shut him down then we would have a good chance at winning.”

Senior Evan Conti chipped in with 14 points in the win, as well.

“[Zaid] had 20 in the first half so I knew they would overplay him in the second half,” Conti said. “Someone needed to be aggressive and score. Zaid needed some help so I moved without the ball, got myself open and hit some shots.”
“He is fearless. A couple times he created plays out of nothing,” Moore said of Conti. “He has been fearless over his four years here.”

Quinnipiac struggled out of the gate, falling behind early by a score of 17-9. Moore then elected to put in a lineup with no starters. The lineup of four freshman, Chaise Daniels, Alain Chigha, Dimitri Floras and Ayron Hutton, and one junior, James Ford Jr., sparked a 7-0 run to put the Bobcats back in the game.

“Big energy with those guys They fly around defensively,” Moore said. “Chaise is playing big, physically, you can put him out there against those guys. Alain has enough athleticism, length and toughness to show that he can play against guys like that. I love what Ayron, James, and Dimitri are doing. They are hungry and they come in and play hard.”

Moore then elected to put the starters back in, and Quinnipiac took the lead and never looked back.

With the win, the Bobcats improve to 5-5 on the season. Quinnipiac is back in action on Monday against Maine at home. Tip-off is set for 7 p.m.