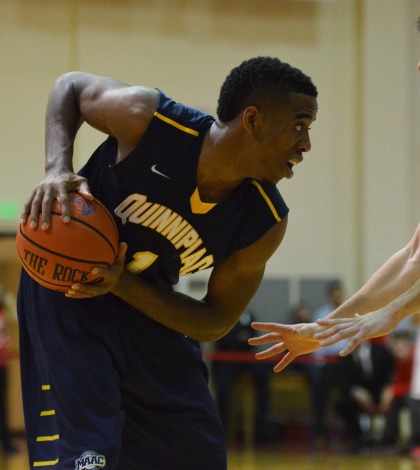 In recent seasons, Boston University junior guard John Papale has had Quinnipiac’s number. Just two years after hitting a game-tying 3-pointer to cause overtime in an eventual Terrier win, Papale hit the game-winning three against the Bobcats Sunday afternoon at Case Gym to give BU a 71-68 win on Sunday afternoon.

Papale, who is also the younger brother of Quinnipiac’s Director of Basketball Operations Mike Papale, scored 13 points in 37 minutes for the Terriers. The junior scored 10 points in the first half, and the only shot he made in the final stanza was the one that would propell Boston University to a win.

“I’ve seen [Papale] make so many big shots,” Boston University head coach Joe Jones said following the game. “He never gets too up or too down, so he is able to focus in on those moments.”

Quinnipiac head coach Tom Moore thought that the Bobcats had too many mishaps down the stretch.

“We made a few too many mental mistakes on both sides of floor,” Moore said. “They made less mistakes than we did, and they were a little more solid than us today.”

The Bobcats started out hot, taking an early 11-2 lead. Evan Conti drained two deep 3-pointers for Quinnipiac, and Zaid Hearst hit one to follow. Following a timeout, the Terriers counterattacked with a 13-2 run of their own led by Papale and Cedric Hankerson to earn a 15-13 advantage

Quinnipiac point guard Kasim Chandler committed two quick fouls in the first four minutes of play and had to go to the bench. Freshman Dimitri Floras replaced Chandler, and scored eight points in 24 minutes, shooting 2-for-2 from beyond the arc.

Hearst scored seven of his 12 points in the last seven minutes of the first half. The Bobcats went into halftime with a 41-36 lead, shooting 63 percent from 3-point range. Moore was pleased with the offensive performance by the guards.

“When we’ve lost games this year, we have had poor offense,” Moore said. “These guys made sure they got extra shots in.”

The second half brought out two physical and aggressive teams, each receiving 12 fouls. The Bobcats pulled away with the biggest lead of the second half following an Ousmane Drame dunk to make it 56-48 with 11 minutes remaining. Shortly after, Drame picked up his fourth foul and was forced to the bench.

“[Drame’s] fourth foul was the one that killed us,” Moore said. “That was one of the mental mistakes that we made as a team.”

This brought out a scoring spree by Boston’s Hankerson, who gave the Terriers their first lead of the half with less than four minutes to play. Hearst, who led the Bobcats with 19 points on the day, felt that the defense was poor on the wing.

“We messed up a lot on the close-out defense, that made up a lot of easy layups for guys like Hankerson and [Eric] Fanning,” Hearst said.

Justin Harris gave the Bobcats a two-point lead following a put back with two minutes left. Boston University retaliated with two Nathan Dieudonne free throws to tie it up.

Then, Papale hit his shot at the top of the key to cap off the comeback.

“The last few years [against Boston University] have come down to one last play, and they are always the ones that make that play,” Hearst said.

With the loss, the Bobcats fall to 3-5 on the season, while the Terriers improve to 3-6.

The Bobcats return to Hamden against another Patriot League opponent on Thursday night, as they play host to Lehigh at 7 p.m.