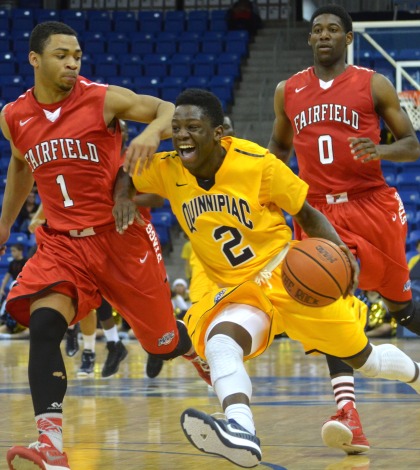 After failing to grab a victory in its opening Metro Atlantic Athletic Conference game against Siena on Friday night, the Quinnipiac men’s basketball team looked to rebound against Fairfield on Sunday afternoon.

The Bobcats shot only 30 percent from the floor, though, and were defeated by the Stags 56-52 at the TD Bank Sports Center, pushing their losing streak to two games to start MAAC play.

“Tip our hat to Fairfield, they played good defense all game,” Quinnipiac head coach Tom Moore said. “They confused us a little bit switching from man to zone between possessions.”

The Bobcats got off to a slow start, scoring only two points in the first nine minutes of the game.

“We aren’t playing confident enough on the perimeter, making great decisions or making shots,” Moore said. “It’s a chore for us, it’s a labor. It was just a difficult loss for us.”

Going into halftime, the Bobcats trailed 26-18 while shooting only 26 percent from the field.

“We couldn’t have played worse offense in the first half, but we looked really good defensively,” Moore said.

But in the beginning of the second half, Quinnipiac got back into the game quickly.

The Bobcats started the second half on a 20-8 run, which was sparked by four-straight points by guard Kasim Chandler.

“I think Kasim getting into the lane and getting loose in transition a couple times [helped us],” Moore said. “We got up the floor a lot in the second half.”

Quinnipiac was paced by seniors Zaid Hearst (20 points and 5 rebounds) and Ousmane Drame (12 points and 14 rebounds). No other Bobcats scored in double digits.

The game remained close up until the final seconds. Quinnipiac was up three points before Fairfield forward Marcus Gilbert hit a deep 3-pointer with 1.8 seconds left on the clock to send the game into overtime.

“We communicated, we switched, we were in his face. He was 26 feet out, it looked like it had no chance of going in,” Moore said. “But the kid’s a big time player and he hit a big time shot.”

Fairfield took that momentum into overtime and never looked back.

“I like how we fought through playing such horrible offense,” Moore said. “Our guys kept our focus and kept our toughness.”

With the loss, Quinnipiac falls to 3-4 on the season and 0-2 in MAAC play.

“It stinks to be 0-2 in the league but its our fate,” Moore said. “[We have to] get better in the next four games then dig ourselves out of it.”

The Bobcats look to bounce back at Boston University on Dec.14. Tip-off is set for 1 p.m.