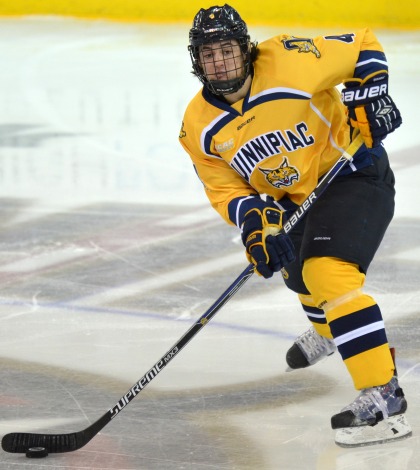 Quinnipiac men’s ice hockey lost to Harvard 5-2 on Saturday night at High Point Solutions Arena in the battle for first place in the ECAC standings.

“I thought Harvard was great tonight,” Quinnipiac head coach Rand Pecknold said. “I thought they were the better team. They are high-end kids that make plays. We played well at times. I thought at 5-on-5 we were really good and we were not good in special teams.”

The Bobcats fell behind fewer than 20 seconds into the game, as Kyle Criscuolo drove the puck past Quinnipiac goalie Michael Garteig to give Harvard the early 1-0 edge. Tyler Moy and Jimmy Vesey each recorded an assist on the goal.

Quinnipiac countered at 2:41 in the first period. Devon Toews and Soren Jonzzon assisted on a Travis St. Denis goal to make it 1-1.

Quinnipiac had numerous scoring opportunities throughout the remainder of the period. Despite outshooting Harvard 14-8 in the period, Quinnipiac took the tied score into the locker room at the first intermission.

“I think [on] some of our best scoring chances we missed the net. We need to do a better job of screening the goaltender,” Pecknold said.

The game remained 1-1 until there were eight minutes remaining in the second period, when Quinnipiac struggled to get the puck out from behind its own net and Harvard’s Phil Zielonka put the Crimson ahead 2-1.

Quinnipiac’s Devon Toews was then sent to the penalty box with a two-minute minor for tripping. With less than a full second on the clock remaining in the second period, Harvard’s Sean Malone netted his second goal in as many days off an assist from Patrick McNally to increase Harvard’s lead to 3-1.

“You don’t want to go into intermission letting up a goal,” senior Matthew Peca said. “I think we stayed positive in the dressing room knowing that we would stay in the game. But obviously things didn’t go our way.”

Four minutes into the third period, Harvard’s Jimmy Vesey lifted the puck over Garteig to put Harvard ahead 4-1.

Brain Hart scored the fifth Harvard goal on an empty-netter.

Quinnipiac scored their second goal with six seconds remaining in the game off the stick of Tommy Schutt who was assisted by Derek Smith and Bo Pieper.

“I keep saying all year long that we are a work in progress. We have a lot of freshmen and a lot of sophomores in new roles,” Pecknold said.

The Bobcats go into a three-week break tied atop the ECAC with Harvard at 12 points apiece.

“We’re obviously excited because we know we can be a lot better,” Peca said.

Quinnipiac’s next game is Dec. 27 against Princeton.