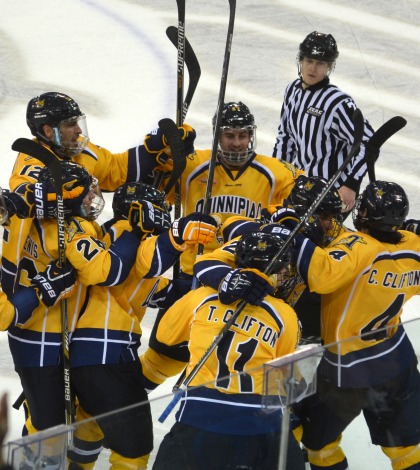 Looking to build on the momentum gained following a 3-1 win over UMass Amherst its last time out, No. 15 Quinnipiac men’s ice hockey opened a weekend of conference play against ECAC rival Dartmouth at the High Point Solutions Arena on Friday night.

The Bobcats kept that momentum going, as Soren Jonzzon netted the game-winner in overtime to lift Quinnipiac to a 2-1 win over Dartmouth.

Dartmouth grabbed the lead in the second period as team captain Travis Sikura deflected a Michael Garteig clearance out of mid air and into the back of the net for his third goal of the season nine minutes into the period.

The play went to review, but the call was not reversed. Garteig expressed his thoughts on the play after the game.

“It may have been a lapse of judgement on my part, but I still think it is a high stick,” Garteig said. “But nothing you can do about it. Just have to refocus and trust your teammates to pick you up after a goal like that.”

Quinnipiac, however, bounced back in the third.

The Bobcats scored the equalizer 3:36 into the third period. Freshman Landon Smith scored his seventh goal of the year on a breakaway, as he tucked the puck past Dartmouth goalie James Kruger’s glove side to make it 1-1. Sam Anas recorded his ninth assist and team-leading 19th point of the season on the goal.

Neither team would break the tie before the end of regulation.

The Bobcats came out firing in the overtime stanza, taking four shots in the extra period. Soren Jonzzon scored the winner 1:38 into overtime, deflecting home a Bo Pieper shot into the back of the net to give Quinnipiac the 2-1 victory.

“The biggest thing for us was putting shots at the net, and not necessarily taking the perfect shot and picking the corner,” Jonzzon said. “We don’t strive to score the ‘pretty’ goal, even though Landon’s was unbelievable. We just wanted to get traffic and chaos in front of the crease to force an ugly goal.”

Jonzzon also spoke on what the team needs to do to improve moving forward.

“For some reason we have struggled with slow starts this season,” Jonzzon said. “We have to buckle down and get that energy up. We can’t wait for them to get the lead for that to fire us up. Although we have had some good opportunities to come from behind and win games, at some point it is going to bite us.”

“One day we are going to come up against a hot goalie, and we won’t be able to sweep two goals to win the game in the third period or overtime. We have to really emphasize coming out stronger.”

With the win, Quinnipiac improves to 9-4-1 on the season. The Bobcats are back in action at High Point Solutions Arena on Saturday night, as they square off with No. 9 Harvard at 7 p.m.