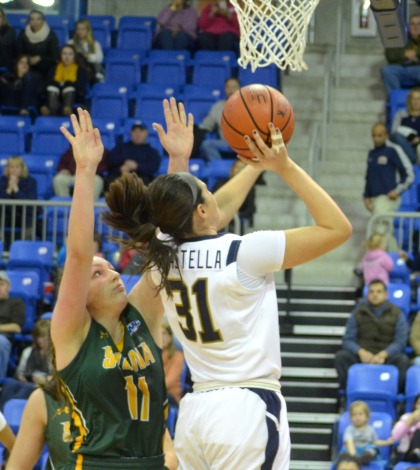 Led by Samantha Guastella’s 28-point performance, the Quinnipiac women’s basketball team improved to 5-2 on the season by beating Siena 78-65 at the TD Bank Sports Center on Friday evening.

Guastella, a senior, tallied a career-high in points and tied the Quinnipiac program record by nailing six three-point shots.

“It felt great,” Guastella said. “We were struggling, so it was crucial that a lot of [the shots] fell.”

Guastella made 5-of-6 three-pointers in the first half to give the Bobcats a five-point lead over Siena. For the night, she shot 6-for-9 from three-point range and 10-for-15 from the floor.

“They were playing zone against us,” Guastella said. “We did a good job filling the open gaps and swinging the ball.

Quinnipiac head coach Tricia Fabbri said that Guastella’s five blocks on defense, in addition to her successful offensive performance, was key in the victory.

“We needed her to be special tonight to get a win,” Fabbri said. “I thought we had good balance. Sammy did a great job finding the seams and the team did a good job finding her open.”

Despite Guastella’s superb performance, and the fact that Quinnipiac shot 42 percent from the floor, Fabbri said that the team’s defense needs to be improved.

“It was a little bit of a choppy game for us,” Fabbri said. “It wasn’t our best 40 minutes from the defensive end. We were supposed to have a little more of a lead after shooting that well.”

Defensively, both teams pressed each other for a majority of the game, a strategy the Bobcats prepared for.

“I wasn’t surprised [by Siena pressing],” Fabbri said. “They were trying to slow us down. I thought they were effective.”

Quinnipiac pressed the Saints on the other end, trying to take advantage of the fact that Siena had only seven girls active for the game.

“We wanted to use our bodies and athleticism to wear them down,” Fabbri said. “I thought stretches of the game they looked fatigued and we took advantages of that.

With the victory on Friday evening, the Bobcats earned their first win in conference play. Quinnipiac improves to 5-2 with the win.
“These games are so monumental early in the season because they are impactful in January when you’re playing for seeding,” Fabbri said. “It was good to have this game at home. It was good to shoot well.”

Quinnipiac will travel to Fairfield on Sunday, a team that defeated Quinnipiac twice last season.

“We have to play better defense and study up all of their plays that they will run against us,” Guastella said of Fairfield. “Turn the page and get ready for a big game.”