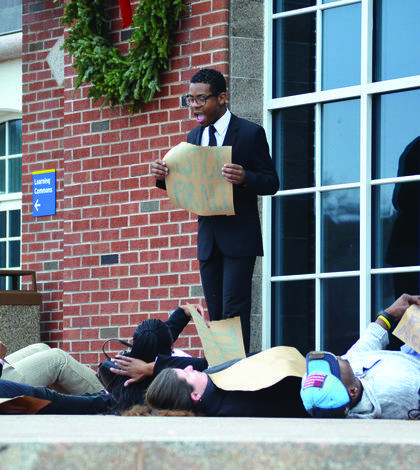 “Hands up, don’t shoot,” students and faculty shouted from the steps of the Arnold Bernhard library on Monday.

“No justice, no peace,” they yelled. 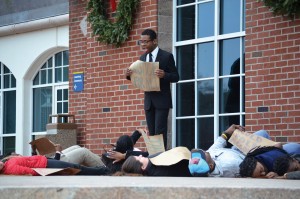 The group of at least 15 students and professors made their way to the Quad around 1 p.m., the same time universities around the country also protested the grand jury decision not to indict Darren Wilson, a former white police officer who shot Michael Brown, an 18-year-old African American man, in Ferguson, Mo.

The students and faculty held signs that read “justice for all” and “black lives matter.” At one point the group re-enacted a die-in, where they laid on the ground, representing the four and a half hours that Brown’s body lay in the street after he was shot.

“People are looking at this case as if it is an isolated incident and thinking that it is just about Mike Brown and just about Darren Wilson,” said Sade Jean-Jacques, assistant director for multicultural education. “But it is really about what the case represents and that is a systematic biased that is put in place that is oppressing people of color.” 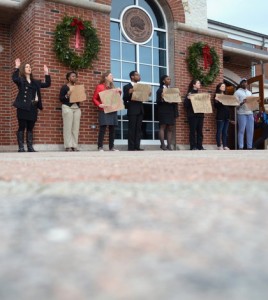 Junior Isaiah Lee participated in the protest. He said the protest was meant to remind people about police brutality, especially toward the black community.

“I think protests are very effective,” Lee said. “Demonstrations are used to get people informed and it sheds light on something that other people may not be concerned about otherwise.”

Associate Vice President and Chief Diversity Officer Diane Ariza heard about the protest on Monday morning. Ariza believes the protest as an opportunity for the community to come together as a whole.

Chief of Public Safety David Barger got the call about the protest and immediately met other officers on the library steps. 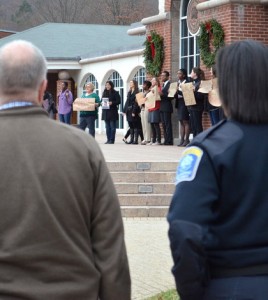 “We were there only to monitor the situation and not control the situation,” Barger said. “We only wanted to make sure things didn’t get out of hand.

He said the protest was both peaceful and orderly.

“I am a huge proponent of First Amendment rights and I thought it was a great way to get the word out there,” he said.

Jean-Jacques said the situation in Ferguson reflects the larger issue of the relationship between the black community and the police. 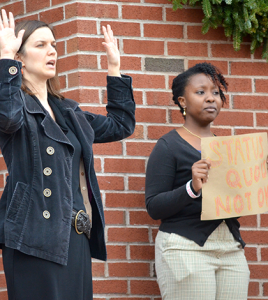 Barger said at a time when students are stressed about classes and finals, the protest made them stop and think about Ferguson.

“If you’re standing out there you can hear people around you starting to talk about it,” he said. “And probably the last thing on most people’s minds today was Ferguson.” 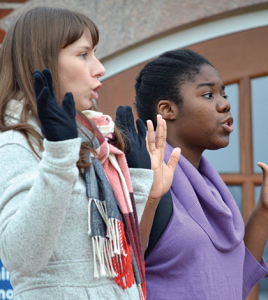 Senior Lexie Gruber noticed the protest when she was walking on the Quad. She said she wished the Quinnipiac community showed its support for issues like this more often. She said her foster brother was killed in New Haven in August in a similar way to Brown, but no one protested because it did not get attention from the media.

“If we want to make change we have to run the narrative as the Americans, as the people, we can’t let the [media] channels tell us what to do,” she said. “There are so many struggles in our own cities and neighborhoods and when are we going to speak up for them?”

Gruber said she wants people to continue this conversation.

“I hope that there will be opportunities to discuss racial issues on our campus,” she said. “And perhaps this will be the impetus to have forums or other dialogues on our campus I feel this is very important especially on a campus that is not very diverse.”

Ariza said she saw a quote from a black police officer in the New York Times that said, “Much has changed and nothing has changed. 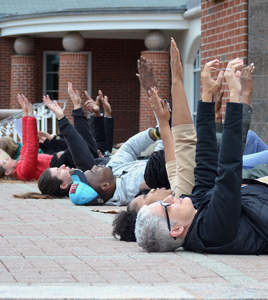 She believes this quote is reflective on how our community acts towards racial tensions.

“I think it means that we have come so far but we have not come far enough,” she said. “Racial tensions are not going to go away if we don’t continue to discuss them. It’s more about really connecting with one another and we need to do more of that.”