This is me: Let’s get down to business 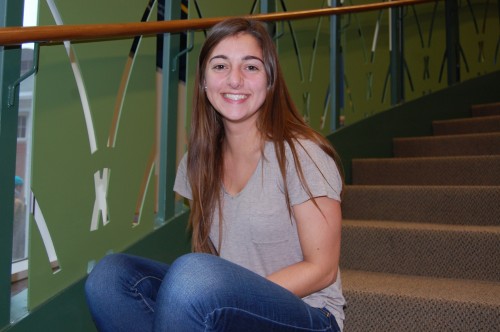 Sitting at a wooden table in a dimly lit dorm room surrounded by neon pink sticky notes, Katheryn DeMarey, an 18-year-old business undecided freshman is illuminated by the glow of her Samsung Galaxy S4 smart phone as she fiddles with the calculator app.

Watching her, you might think she is just another typical college student doing her math homework, but you’d be wrong. She is actually calculating how much she owes her workers. At 11-years-old, DeMarey was inspired to start making money.

“When I was 11 my dad lost his job,” said DeMarey, wearing an Aztec printed t-shirt with a loosely tied back pony tail. “I wanted more things like a cell phone and expensive clothes all the things a bratty teenager wants. My parents said you have to learn to deal with money and be responsible if you want these things. They suggested that I get a job.”

DeMarey realized she had to step up, but this was nothing new to her.

“I didn’t think it was weird at all that my parents wanted me to work,” she said. “My parents always worked for what they had, we always had a chore list.”

Here the inspiration began for a new journey.

“I decided to do landscaping as my business because that was the most frequent job request I seemed to always get asked. Mowing, weeding, and mulching,” she said.

So she designed flyers with her father, Jeff, and put them in all her neighbors’ mailboxes.

When DeMarey was a freshman in high school the official business began. She named the business DeMarey Landscaping and hired her first employee to help service a flourishing client base. Now she has five men working for her and more than 100 clients.

“I just love working with the boys. We always are getting along and we joke around a lot. There another little family,” she said.

Damian Perry is one of DeMarey’s employees.

“Her business was a wonderful idea,” Perry said. “She is smart, responsible and persistent.”

DeMarey didn’t just create her business and then watch as the men weeded, planted, mowed and fertilized. She goes to every job site. She delegates tasks and works alongside the men.

“Literally every single day of the summer I woke up at 6:30 a.m. in the morning, made lunches for the boys,” she said. “Three or four days of the week we go and cut lawns the other days we do huge projects. It’s so nice seeing the finished project and the happy customer,” she said.

The team took on its biggest project during the spring of DeMarey’s senior year of high school.

“This lady wanted her whole yard flipped. We designed the garden, picked out flowers and removed bushes. We seeded, mulched and did much more,” she said.

But DeMarey said the bigger challenge is managing this business from her dorm room.

“Everything about it is ridiculously hard,” DeMarey said. “Communication is hard here it’s like you’re living in a bubble and the weather is always different. Everyday I write the schedules, I do the billing, the taxes, I do all the invoices, and I handle all the money —it’s awesome. I work for a good three to four hours a day here on top of my job for work-study.”

DeMarey’s goal is to make enough money to pay off her college debt.

“I don’t know how she does it,” Jeff said. “Once she has an idea in her head there is no stopping her- it’s just go, go, go. She is energetic, passionate and determined.”