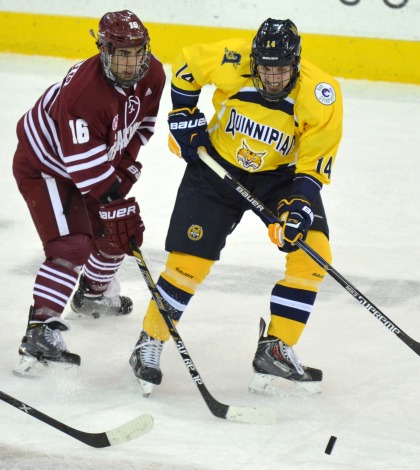 After winning seven of its last eight games, Quinnipiac men’s ice hockey looked to keep its hot streak on the ice rolling. Unfortunately, Massachusetts had other plans in order.

Alex Barron scored twice, but Quinnipiac suffered a 3-2 loss at the hands of the Minutemen in the first part of a weekend home-and-home series that started at High Point Solutions Arena on Friday evening.

“I’m disappointed in how we played tonight. I thought UMass was good,” Quinnipiac head coach Rand Pecknold said. “They battled and played with a lot of passion and we didn’t. We have to play harder than that.”

Both teams struggled out the gate, but Quinnipiac struck first with a goal by Barron, a senior defenseman, 4:35 remaining in the first period.

“It was a good cycle by our forwards and I got lucky enough to be on the receiving end on a puck in the slot,” Barron said. “I just saw an opening and I put it in.”

After Quinnipiac went up 1-0, Massachusetts scored three-straight goals. The first came from Steven Iacobellis on a power play to tie things with 2:11 remaining in the first period.

The Minutemen scored again as Frank Vatrano found the back of the net with 12:45 remaining in the second. Troy Power scored the third-straight goal with 19:16 remaining in the third period, and Massachusetts never looked back.

Barron scored his second goal of the evening with 1:34 remaining in the game to pull the Bobcats within a goal at 3-2.

“I blacked out there for a minute,” Barron said. “I just crashed the net, closed the net, shot it as hard as I could and it went in.”

Quinnipiac struggled specifically on the power play, going 0-6 in that department.

“I thought our power-play players on both units didn’t have a lot of fire or a lot of passion,” Pecknold said. “They were just sluggish.”

The Bobcats were also without senior defenseman Dan Federico for tonight’s game.

“He is one of our best players and we missed him tonight. I think he is one of the best defenseman is our league,” Pecknold said. “Danny is an elite player and hopefully we get him back out there soon.”

With the loss, Quinnipiac falls to 8-4-1 on the season.

The Bobcats are back in action Saturday at UMass. Puck drop is set for 7 p.m.