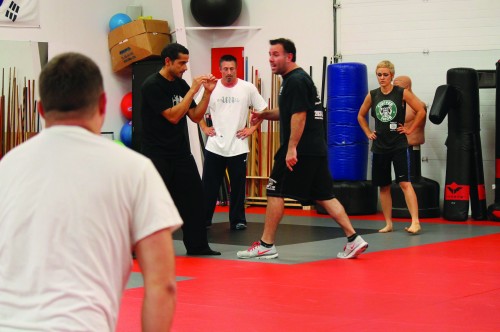 A group of 20 women will meet for a two-hour self defense class at 7 p.m. in the Burt Kahn Court on Wednesday. The class, planned by five seniors for their public relations final project, filled up weeks before its Nov. 19 deadline.

Seniors Meaghan Browne, Kyle McCartney, Gabriella D’Agostino, Madison Elliott and Nicolette Illiano had to organize the class for their PR-400 public relations class to practice their event-planning skills. The event will teach basic combative techniques for protection in a dangerous encounter.

“The main reason that we were inspired to host a self defense event was due to the fact that Quinnipiac University is made up of primarily a female gender,” Browne said. “We go out into New Haven on most weekends, which we all know is not a very safe area and we felt as though it is extremely important for women to know how to protect themselves.”

Two female members of the group are also part of the Alpha Chi Omega sorority, which raises awareness for domestic violence as part of its philanthropy, Browne said.

McCartney also credits his group’s inspiration for the event to the domestic violence allegations against two professional football players–Ray Rice and Adrian Peterson–earlier this season.

“We were given the assignment during the [controversy] of the NFL and its lack of responsibility to responding to incidents of domestic violence,” he said. “That was a major factor toward gearing it toward women.”

When McCartney first reached out to Scozzafava–a former professor of his–to teach the class, the 16-year physical therapist and 6-year Krav Maga instructor said he was “all for it.”

“I believe strongly in the program and I think most would agree that the ability to defend oneself is important,” Scozzafava said. “Young women are often the target of violent aggression… [This] is often the first time a young girl leaves home and the relative safety of a familiar environment. QU is a very safe campus but the students’ college experience often leads them away from campus.”

Scozzafava hopes for students to learn to “move from a state of calm to aggression quickly.” He said a response within the first few seconds of an attack is the most critical.

“Students will learn some basic combatives such as hammer fist strikes and groin kicks,” he said. “They will practice using those skills from different positions to give them different experience…In a self-defense situation there are so many variables. We work on the tools and principles needed to allow the student a flexible defense strategy.”

The class was limited to just 20 women because Scozzafava feels that the smaller group size allows him to create a safe environment where each student gains the knowledge and support they need, but Browne believes the demand for self-defense education goes beyond a single event.

“I know many of the girls that I spoke with were bummed when they had heard our event was already filled and they could not take the class, so there is clearly a demand for activities like this especially for girls on this campus,” Browne said. “I would love if our event was able to inspire Quinnipiac University to host more self defense classes like this in the future.”

Professor Scozzafava agrees that he would welcome the opportunity to discuss with administrators how a well planned and executed collegiate self-defense program would be beneficial.

“A great self-defense system contoured and focused on the student would make a safe campus safer,” he said. “As a father of two girls, I would look fondly at a university that offered such a program.”