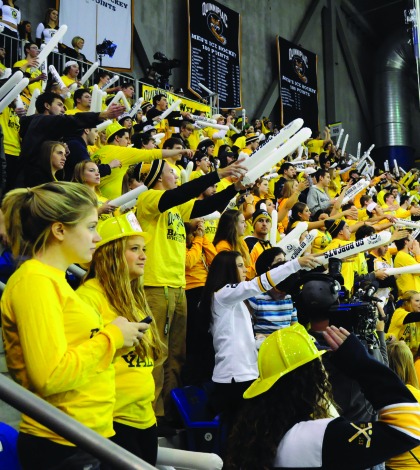 Within 40 minutes, student tickets for the Quinnipiac men’s ice hockey games against Colgate University on Nov. 7 and Cornell University on Nov. 8 were sold out, according to Executive Director of the TD Bank Sports Center Eric Grgurich.

“It’s the quickest the tickets have gone for it not being a QU-Yale game,” Grgurich said. “They went in about 40 minutes for both games. And it’s really been that way all season long.”

Grgurich said student tickets have sold out within 24 hours over the past year and a half. But once the Colgate and Cornell tickets were available, he said he was surprised to see the tickets sell out in less than an hour.

Many students said they noticed an increase in ticket sales and games selling out quickly ever since the men’s ice hockey team reached the national championship in 2013.

But this increase in student tickets is not an extension of the student section. Grgurich said a standing room ticket does not guarantee a seat. Students with standing room tickets can stand anywhere in the arena, as long as they are not blocking doorways or stairs to get to seats.

“The turnout has been fantastic,” he said. “We want to get the most amount of students in the arena that we can.”

The reputation of the men’s ice hockey team paired with tickets selling out in record times has prompted several students to want the university to expand the student section.

Senior health science studies major Chris Caruso is one of many who want more seating for students at hockey games.

“The atmosphere of the student section is great,” Caruso said. “On most nights, the whole section is on their feet, cheering the team on. But it’s very difficult to find a seat unless you go to the game incredibly early.”

Junior nursing major Mallory Eliasson is another student in support of expanding the student section. She believes the section is not big enough to accommodate the amount of students who attend Quinnipiac.

“Quinnipiac is trying to become a bigger school, which is evident by the higher acceptance rate with each passing year,” Eliasson said. “We have so much pride for our school. We want to go to every game, and we should definitely be able to.”

Although some students still have issues with the online system, Grgurich said it is a more fair system than the previous methods of ticket distribution.

A few years before the online system launched, students would have to pick up tickets from a table at the student center the week of the game, according to Grgurich. But he said the online system allows everyone a fair opportunity.

“We want it to be the easiest and fairest way for students [to get tickets],” Grgurich said. “We want all students to have a chance to get tickets.”

Leah Schwartz, a junior English major, said she always sees empty rows in the sections for the public, but she never sees that in the student section. She said expanding the student section could fiscally benefit the university, overall.

“The university doesn’t make money off of [student] tickets directly,” Schwartz said. “Expanding the student section should increase revenues with sale of food, or even the sale of game gear.”

Grgurich said these open rows of seats in the public seating area are typically season tickets sold to an individual who was unable to attend the game.

Although many students want an expansion of the student section, not all students support this idea.

Katie Strong, a junior marketing major, said she does not think the university should expand the student section beyond what they already have.

“The [men’s] hockey games usually sell out with tickets bought by the public,” Strong said. “They are making money off of [the tickets for the public], while our tickets are free.”

Since the university sells season tickets during the summer months, Grgurich said there is not a definitive way to know how many students and how many members from the surrounding communities will attend each game.

Though she doesn’t support expanding the student section, Strong does think students who want to attend the game should have the opportunity to do so if they don’t get a ticket through the online student ticket portal.

“Students [should have] an opportunity to purchase admissions tickets at a discounted rate,” Strong said.

Whether or not all of this means the university will expand the student section remains unclear at the time, according to Grgurich. He said he acknowledges the school spirit exhibited at the hockey games and hopes it will continue to prosper and spread to the other sports.

“I see it growing from where it used to be to now,” Grgurich said. “Everyone’s picking up a little bit of tradition.”