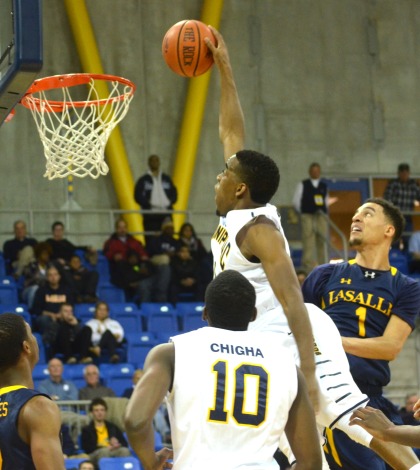 The Quinnipiac men’s basketball team suffered its first loss of the season at the hands of the La Salle Explorers at the TD Bank Sports Center on Tuesday evening in Hamden.

The Bobcats lost their first game 60-58 in a rematch of last year’s College Tip-Off Marathon on ESPN, where the Bobcats also lost 73-67.

“I want to commend La Salle on their perimeter defense. They were in our shorts on the perimeter right up into the last play,” Quinnipiac head coach Tom Moore said. “They are very athletic and very tough-minded defenders.”

“We had no offensive flow all game. We shot 29 percent, that speaks for itself,” Moore said. “Their perimeter defenders dictated the game.”

“We played great defense in the first half. Alain Chigha, James Ford, Justin Harris and Dimitri Floras were great on defense,” Moore said. “They came off the bench and brought a lot of energy defensively.”

In the second half, Quinnipiac allowed La Salle to get back into the game after they went on a 12-0 sparked by three-straight 3-pointers.

“There was an 8 minute stretch where we had no cohesion offensively, where we couldn’t get into our sets,” Moore said. “Even when we had the lead, I feel like we had no flow on offense.”

The Bobcats kept it close in towards the end of the second half. The teams kept trading baskets until La Salle pulled ahead by 2 with less than a minute to go.

With twelve seconds remaining in the game, Hearst was fouled on a 3-point attempt and made two of his three free throws to tie the game at 58 a piece. Jordan Price of La Salle came down the floor on the next possession and drove the lane, getting fouled with 3 seconds remaining. He made both free throws, which would clinch the game.

Quinnipiac was without freshman forward Samuel Dingba, who started the first game for the Bobcats.

“He has a knee issue that he suffered in the Yale game on Friday,” Moore said on the absence of Dingba. “We will evaluate him going forward.”

The Bobcats will be back in action at the University of Albany on Saturday, November 22nd. Tip-off is set for 7 p.m.