Students throw down the beat at Rap Battle 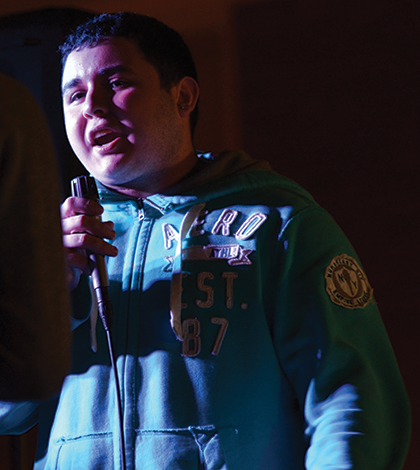 More than 100 students gathered at the Complex Courtyard Thursday evening for the university’s first rap battle.

Jon Hammer, event programmer for Sigma Tau Delta and general manager of WQAQ, said he hopes the rap battle shows students that music is a form of creative writing.

“I want to really spread English and help people understand that creative writing is not just necessarily poetry or fiction,” he said. “It can be lyrics over music, which is poetry, but people need to understand that when you’re rapping or freestyling that is creative, that is writing. And that’s not something to take lightly if you can do it.”

Participants were pitted against another student and had two 45-second battles where they freestyle rapped to music. The rappers often threw insults at each other, making fun of their competition’s physical appearance or clothes. Students could use profanity, but not racist language.

Winners were determined based on the crowd’s reaction when each participant’s name was called. If the match was too close to call, each participant had another 45 seconds to rap—except this time, a capella style, so no music.

The winner of that battle would then move onto the next round to compete against the others round-robin style.

“That was honestly the funnest (sic) thing ever,” Afonso said. “I didn’t think it would be that fun…just me doing what I love, just rapping, that’s what I do. Rapping is one of my passions, so it’s fun to do that in front of everybody.”

Afonso said he has been writing rap since high school.

“I’d be one of those kids in English class just writing,” he said. “I’d read the book when I got home.”

He said he improvised throughout the rap battle.

“In between rounds I mean you can get an idea of what you feel like you’re going to go with because you know who your opponent is after the first round,” he said.

Afonso said the second round, when he competed against senior John Mantz, was the most difficult round for him because Mantz was tough competition.

But then Afonso started rapping in Spanish and the crowd cheered and laughed.

“I don’t want to be like everybody,” he said. “I want to change it up and be a little bit original because I’m trilingual so why not just incorporate a little bit.”

Afonso learned Spanish by talking to the workers at his father’s company. Portuguese is his first language and then he learned English.

Afonso heard about the event because he is in WQAQ and friends with Hammer.

Hammer got people to sign up for the rap battle by putting up posters and advertising the event on Facebook.

“There’s honestly a very big rap community out here, but there’s no outlet to do it,” he said. “So I kind of think people came to us instead of us going to them.”

Hammer said he was not sure how many people would come to the rap battle. As of Thursday morning, only five or six people had signed up to rap and only 26 people said they were going to the battle on the Facebook event. Then, students saw Hammer throughout the day on Thursday and asked to sign up to rap.

He said having the event outside in Complex Courtyard helped draw people to the event because students saw it as they walked to their residence halls.

“One of the reasons we picked this location is that we could get people from Sahlin, Founder, Bakke and also Perlroth to come out,” Hammer said. “And that’s a huge part of it and I think it was very successful.”

Check out our photo gallery of the Rap Battle.