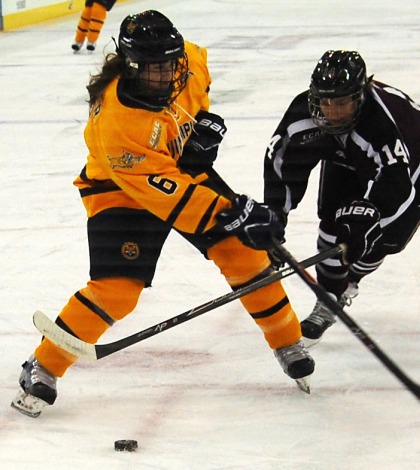 Looking to build on the momentum gained from Friday’s 6-1 win over RPI, No. 5 Quinnipiac women’s ice hockey defeated Union 5-0 at the High Point Solutions Arena in Hamden on Saturday.

The Bobcats wasted little time making their presence felt on both offense and defense, outshooting Union 15-0 in the first period of play. Cydney Rosler capitalized, putting her third goal of the season away from the point on a shot assisted by Nicole Brown to make it 1-0 Quinnipiac.

The second period was not much different, as the Bobcats outshot Union 23-5. Erica Uden Johansson wriested home her third goal of the year on a rebound to make it 2-0. Shiann Darkangelo and Emma Greco were each credited with an assist.

Uden Johnasson had six points on the weekend.

The team looked dominate throughout, outshooting Union 63-8, as Laden recorded her nation-leading sixth shutout of the season in this, her 9th start. Following the game, Head Coach Rick Seely reflected on how he felt it was, ‘“the best 60 minutes they had played all season.

“We held [Union] to 8 shots, 5 of which came from outside of the blue line,” Seely said, “I was impressed with our offense, they stayed committed to driving to the net. Just being aware of what was there and taking advantage of the situation is really what made the difference.”

With the win, Quinnipiac improves to 9-0-1 on the season. The Bobcats hosts reigning NCAA Division I National Champion Clarkson (9-3-1) next Thursday at the Point Solutions Arena.