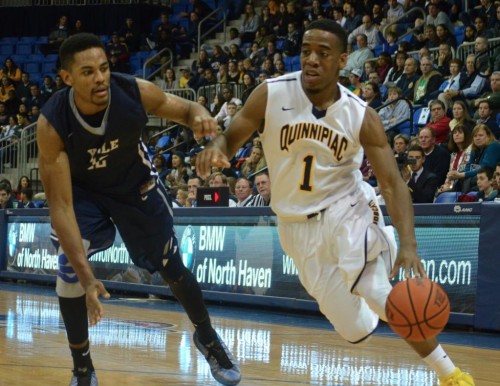 Those in attendance at the TD Bank Sports Center on Saturday night for the Connecticut 6 Classic game between Quinnipiac and Yale got just what was advertized: a classic.

Lead by a career-high 35 points and 11 rebounds from senior captain Zaid Hearst and 13 points, 15 rebounds and seven blocks from senior Ousmane Drame, the Bobcats defeated the Bulldogs 89-85 in double overtime at Lender Court.

“Actions speak louder than words, and I have named one captain in all seven of my years [at Quinnipiac],” Quinnipiac head coach Tom Moore said. “He played 49 minutes of a 50-minute game and still looks like the freshest guy out there. I hold him up on a pedestal. We have never had a kid who wants to win as much as Zaid Hearst, ever.”

For Hearst, performing in front of a crowd of more than 3,000 at The Bank had a huge effect on the outcome of the game.

“It was a great feeling having the student body and all of the fans out and supporting us,” Hearst said. “It was a big reason why we won tonight.”

Quinnipiac trailed 40-38 at halftime, despite 17 points from Hearst. Yale was led by point guard Javier Duren in the first 20 minutes, as he scored 18 points while Justin Sears added 10.

Following the break, Drame lead the way for Quinnipiac defensively, blocking five shots in the second half alone. Hearst scored 12 second-half points, while holding Sears to just two second-half points on the other end.

The Bulldogs, though, wouldn’t go down without a fight. Drame hit a shot to tie the game with 23 seconds left, and then blocked a shot with six seconds left to send things into overtime.

“[Drame is] at 75 percent of what he will be in two to three weeks coming off the meniscus,” Moore said. “He just needs to shake off a little bit more rust and learn to trust it a little bit more, which for some athletes, can be the toughest thing.”

Hearst missed a shot at the end of regulation, which sent things into overtime.

“I had been sitting behind some of the best competition in Quinnipiac history in Ike Azotam and Ousmane Drame,” Harris said. “And after playing against that tough of competition day in and day out, when you finally get an opportunity it feels great to finally go out there and make a contribution.”

Moore spoke of how Harris impressed him, and how it could impact his plans in the future.

“He earned a ton of trust from the head coach going into Tuesday‘s game against La Salle,” Moore said. “It was a really big night for him, and he really needed it.”