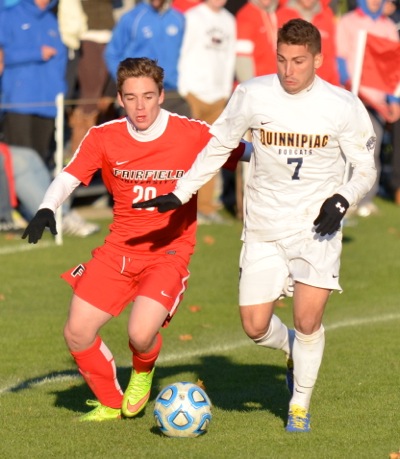 Last season, penalty kicks were a sign of relief for the Quinnipiac men’s soccer team. The Bobcats won in PK’s in both the MAAC Championship Semifinals and Finals in 2013, advancing to the program’s first NCAA Division I Tournament.

This season, however, things didn’t go quite the same.

After playing to a 0-0 draw through two overtime periods, No. 6 Fairfield defeated No. 1 Quinnipiac 3-1 in the round of penalty kicks—ending the Bobcats’ season at the QU Soccer Field in Hamden on Friday afternoon.

“I want to obviously congratulate Fairfield,” Quinnipiac head coach Eric Da Costa said. “I’ve said it all year, and it came true today. Any team can beat any other team in this conference. It’s a testament to our league. We’re happy for them, and we tip our caps to them.”

Jake Zuniga got things started in penalty kicks, blasting one past Quinnipiac goalkeeper Borja Angoitia to give Fairfield the advantage.

Angoitia then took the first penalty kick for the Bobcats, which sailed over the net and was no good.

Then, after Ben Whitcomb’s miss for the Stags, Quinnipiac tied it up when John-John Diaz found the back of the net.

Fairfield’s Jonathan Uy proceeded to put one past Angoitia for Fairfield, and Quinnipiac’s James Greco’s shot was stopped.

Jordan Ayris then ended Quinnipiac’s season, finding the back of the net to give the Stags a 3-1 penalty kick advantage.

The loss ends Quinnipiac’s 12-game undefeated streak dating back to the regular season. The Bobcats went 10-4-5 on the 2014 season before dropping the MAAC Semifinal contest.

“I couldn’t be any more proud of my players this year for what they accomplished,” Da Costa said. “I think when the sting wears off a little bit, once the dust settles and the emotion goes away, I think we can be very proud of what we accomplished.”

Angoitia, Zach Friedenreich, Raphael Carvalho, Machel Baker, Ashton Pett, Joe Da Graca and Marcos Spanos all graduate from Quinnipiac’s roster in the spring. All seven seniors were apart of the Bobcats’ 2013 MAAC Championship team that appeared in the NCAA Tournament.

“The proof is in the results,” Da Costa said. “The impact [of the senior class] is immeasurable. I say it every year, but, you can always replace players. Replacing people is tough. And these are great people who have made an impact on our program and will leave a very big imprint.”