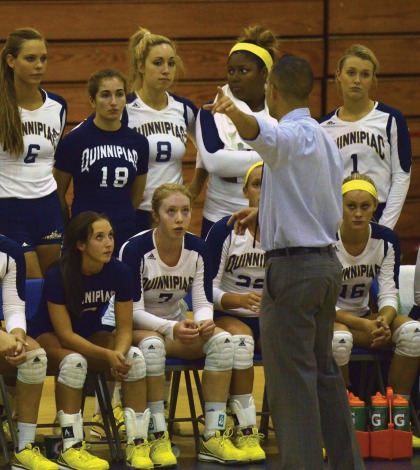 With two games left in its regular season, there is no question that the Quinnipiac women’s volleyball team, currently 2-27, is having its setbacks.

The Bobcats have lost 16-straight games, with their last win coming on Sept. 24. Sitting at the basement of the Metro Atlantic Athletic Conference standings with no league wins, the Bobcats struggle to compete in their conference. In the Nov. 3 rankings, Quinnipiac was ranked 329th out of 334 teams in the NCAA Division I level.

Quinnipiac head coach Kristopher Czaplinski believes the problems for the Bobcats aren’t talent- based, but due to lack of experience. The roster includes six sophomores and five freshmen. On top of that, four members have suffered season-ending injuries.

“We are relying mostly on freshmen and sophomores right now, but you can expect that in a rebuilding program,” Czaplinski said.

Czaplinski is currently in his third season at Quinnipiac, his first head coaching job after being an assistant at Post University. So far at Quinnipiac, Czaplinski holds a 9-76 record with his most successful season being last year’s 5-26 record. The Bobcats went 5-26 the year prior to Czaplinski’s first season.

“I don’t really like to look at wins and losses right now. I knew coming into a rebuilding program that we would have troubles like this,” Czaplinski said. “I like looking at getting better as a team. I don’t consider anything that this team is doing a disappointment.”

Getting better as a team includes creating a winning culture in the program. Czaplinski believes this will be tough to accomplish.

“That [building a winning culture] is the biggest struggle right now,” Czaplinski said. “We are trying to find an identity for the team.”

The Bobcats have failed to win a game in their conference, posting a record of 0-16 and only winning seven sets in those games. Quinnipiac is last in the MAAC in hitting percentage, kills and digs.

Czaplinski believes this is because there is still learning to be done.

“I think that they [the freshmen] hit a learning curve when they came in, and they are just trying to get through that right now,” Czaplinski said.

One of the freshman going through this transition is Nicole Milillo. Serving as the libero for the Bobcats, Milillo has seen time in every match and is currently second on the squad in digs with 176. Milillo thinks jumping into a significant role early on in her career will eventually benefit her.

“We get to run through this first year rut together, and it will make the future easier,” Milillo said. “In a few years, we will be much more experienced than the teams that we will be playing.”

Czaplinski is happy with the younger players’ performances thus far, and thinks they are bettering the team as a whole, both during games and practice. All of them are going to be a part of the Bobcats’ future, he said.

“I brought all of them for a purpose here, and they all fit in the picture that the coaches have for the future,” Czaplinski said.

Czaplinski remains content with the upperclassmen on the team, and believes they are helping the younger players.

“I think the juniors and seniors are sharing their experience with the underclassmen and showing them how to handle situations,” Czaplinski said.

One aspect Milillo believes is problematic with the team is leadership. She thinks that there is not one definitive person that has stepped up as the team’s leader.

“We need someone to step up as the team leader. We have a lot of people trying to do that, but it is difficult to pinpoint the leader of the team,” Milillo said.

Another problem that Quinnipiac has experienced this season is staying healthy. Coming into the year, the Bobcats found out four players would not be able to play this season. Czaplinski made the decision that the players would not play and instead receive surgery for their respective injuries.

Czaplinski believes that even with injuries and still a young team, the Bobcats will improve next year. He believes one thing that will improve is the team’s depth. Overall, Czaplinski thinks that it will take three to five recruiting classes to make Quinnipiac a successful program.

“It’s going to take time to figure things out,” Czaplinski said. “There is some things that we need to figure out as a team.”