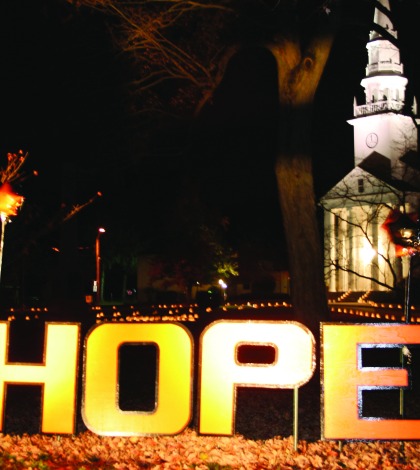 Thousands of luminaries filled with burning candles lit up the town of Cheshire during its 10th annual Lights of Hope event on Nov. 8.

Started in 2005 by Cheshire residents Jenifer and Don Walsh, Cheshire’s Lights of Hope is an annual nonprofit event that has supported 11 local charities and raised more than $600,000 since its origin.

“It’s an event that basically brings the entire community together,” said sophomore Cody Brissette, a Cheshire resident and Quinnipiac student, who participates in the event every year.

This year, the event raised $55,000 to support the Cheshire Community Food Pantry, Cheshire Youth and Social Services, the Petit Family Foundation and the Cheshire’s Lights of Hope Scholarship Fund.

Supporters decorated luminaires, equipped with 15-hour burning candles to illuminate the town in a “Mile of Hope” along Route 10. Quinnipiac donated close to $300 and students made 170 luminaries to set up in front of Cheshire High School.

Don Walsh, president and co-founder of Cheshire’s Lights of Hope, said he was “very grateful” to the university for its support and each year he sees more groups from Quinnipiac volunteering.

“Many of the students don’t live in this community and yet they make it their own, which is great,” he said. “They’re making a difference in a lot of people’s lives.”

Brissette, a lifetime resident of Cheshire, was “born into” the organization and would volunteer at the event with his football teammates in high school.

“I’d never really gotten involved past just making luminaries for my house till this year, when I got Quinnipiac involved,” he said. “I went to Res Life at the beginning of the semester and got the Alumni Association to donate $175 for luminary kits.”

As a resident assistant at Quinnipiac, Brissette asked his residents and other RAs to make luminaries.

“I realized that this was a great opportunity to integrate the Quinnipiac community into the Cheshire community,” Brissette said.

He is one of the hundreds of volunteers that assist with the event, according to Jenifer Walsh, the vice president and co-founder of Cheshire’s Lights of Hope.

“Bus-loads of people, from seventh graders to university students, come to help at our fundraising nights leading up to the event; they help make luminaries, they help set up,” she said. “It’s unbelievable.”

The Walsh’s started the event in 2005 as a holiday tradition by setting up luminaries on their street at Christmas time with neighbors, but later they decided to turn it into a fundraiser. For the first two years they raised money for Relay for Life and multiple sclerosis research.

Then in 2007, Cheshire resident Jennifer Hawke-Petit and her two daughters were sexually assaulted and killed during a home invasion.

“Everyone in Cheshire wanted to do something to help; we wanted to come up with a way of unifying our town, and we felt the luminary event was the perfect way to do it,” Jenifer said. “The word got out and it was like wildfire, we couldn’t stop it.”

That year, all 475 streets in Cheshire participated in the Lights of Hope event, making nearly 140,000 luminaries. Throughout the years, the number of participating streets has dwindled, but this year 251 streets participated–a 20 percent increase from 2013.

The event holds an emotional significance for many participants, especially Dr. William A. Petit, who escaped from the home invasion that took the lives of his wife and daughters.

Petit has since founded the Petit Family Foundation, which raises money to support the education of young people and women in the sciences, protect victims of domestic violence and help individuals affected by chronic illnesses.

Since 2008, the foundation has given out $1.25 million in grants to various organizations such as the Connecticut Science Center and the Susan B. Anthony House in Hartford. The donations received from the Lights of Hope event will be used to fund more grants.

He advises Quinnipiac students to give back to their communities, whether to the Lights of Hope event or to the thousands of other causes in the world.

“My youngest daughter Michaela was 11 when she died, and she had just learned about Gandhi in school . . . [and] the quote, ‘You must be the change you wish to see in the world,’” he said. “I would say that to the students of QU – you’re lucky enough to be at such a nice school and you’ve been given many advantages, so it’s important to pick something you’re passionate about and give back to the community.”

Brissette, who knew the Petit family, said he wants to bring the luminaries directly to campus for future events.

“The event means a lot to me because I know how much it means to [Lights of Hope] to give back,” said Brissette. “I definitely plan on participating next year, and I just want it to keep getting bigger and keep lighting up the community.”