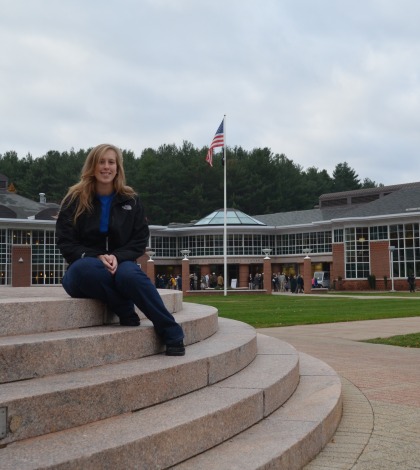 She said the military life was the only thing she was exposed to. And after living in Hawaii, Georgia, Germany, Alaska, Texas and Maryland due to her father’s career in the Army, Sloane Devens enlisted in the Air Force following her freshman year at Anne Arundel Community College in Maryland.

Stationed in Germany, Devens was deployed to Iraq for six months in 2009 and to Afghanistan for another six months from October 2010 to April 2011. After two tours, four and a half years of service, and reaching the rank of senior airmen, Devens left the military and moved back with some family in Virginia where she attended Thomas Nelson Community College. There, she earned an associates degree in social sciences in May of this year. 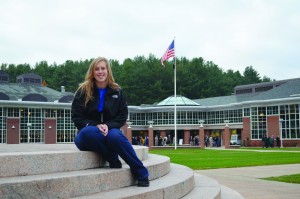 However, the transition from military life to civilian life was not as drastic as some might think, according to Devens.

Despite the education she was receiving, Devens noted that the community college atmosphere didn’t feel like home.

“There is no close-knit community at community college,” she said. “People just come there to go to class and go back home to their families.”

After this realization, Devens started to seek other options.

“I was going to transfer to William & Mary,” Devens said, “but it was like pulling tooth and nail with the application process and everything from the administration side there.”

Devens visited Quinnipiac over her spring break and said she realized its dedication to student veterans is more substantial than that of the College of William and Mary.

“[QU administrators] were like ‘Here is all the stuff you need. Here’s three different contacts,’ and I was thinking ‘Wow. These people really want me,’” Devens said. “It felt nice that they were willing to totally help you at every corner and didn’t give you a hard time about it.”

Devens also praised the sizable veteran population and the large amount of students getting involved on campus and in the community. There are currently 87 student veterans enrolled at the university.

“There is a pretty decent veteran population and also a big get-involved kind of population,” Devens said. “People are very supportive no matter what your background is. It is really a nice environment…a wonderful community.”

Devens said there is one thing that distinguished Quinnipiac from all other institutions of higher learning: the presence of Director of Veteran and Military Affairs Jason Burke.

Burke retired from the US Navy in early 2013 with 26 years of service and earning the rank of captain. After a short stint as a consultant at an oil and gas company, Burke came to Quinnipiac and became its first director of veteran and military affairs.

Burke describes his position as customer service support for veterans.

“Quinnipiac wanted someone that can really talk with the veterans, understand what some of them have been through, and to be able to point them in the right direction,” Burke said.

He helps the students transition from military life back to student life.

“[I] advocate for the student veterans that are here on campus,” he said. “I’m here if they need counseling services, some linkages with the West Haven V[eteran]A[ffairs,] if they need help registering for classes…and to help them navigate their benefits.”

Former Sergeant and current Quinnipiac student, Michael Cosgrove, who was an infantryman stationed with the Army’s Old Guard at Ft. Myer, VA, also said Burke is an incredible resource.

“Any questions I’ve presented to [Burke] have been swiftly answered and any issues quickly resolved,” Cosgrove said. “To say that he’s been helpful would be an understatement.”

Devens said Burke’s guidance was vital in helping her through the transition to Quinnipiac.

“Jason Burke was amazing and answered any and every question I had,” Devens said. “I was really stressing. I didn’t have any family up here I had nothing up here…The fact that Quinnipiac is super military-friendly is why it popped up on my radar…and I knew I wanted to use the GI Bill.”

The Post 9/11 GI Bill, which is available to veterans who have served 36 months or more, helps veterans at Quinnipiac go to college without paying any money out of pocket. This bill helps pay the tuition and fees for students like Devens, Cosgrove, and some of the 87 student veterans on campus, in addition to the 50 spouses or children of veterans who have passed on their benefits.

Another program called the Yellow Ribbon Program covers overages in tuition that are not covered by the GI Bill, and those are split between Quinnipiac and the Department of Veterans Affairs, according to Burke.

After college, Devens hopes to use her political science degree to work for a non-profit.

“I plan on continuing my education into graduate school for theology,” Devens said. “Between now and then, I would really like to work with any non-profit community and environmental outreach organizations either through the church community or through AmeriCorps.”