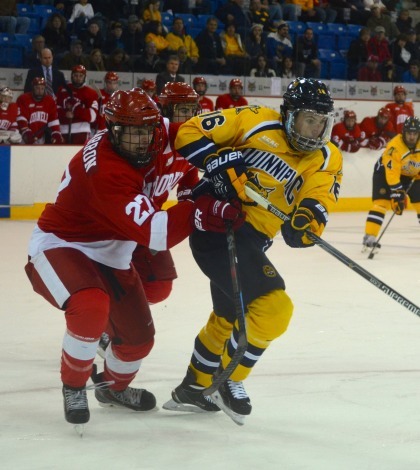 Coming off a 5-0 victory against No. 4 Colgate at home, the Bobcats looked to build on that success against Cornell. Quinnipiac started off slow, having to kill a five-on-three penalty in the first period.

“That would be the key to the game, killing off a long five-on-three there is one key and then we killed off the five-minute major,” Pecknold said. “I thought the PK guys really battled, I thought [Michael Garteig] was good on that, too.”

Senior Matthew Peca was given a five minute major and a game misconduct 5:52 into the second period for a hit from behind.

“Once we lost Peca for the game I thought our guys buckled down,” Pecknold said. “He is such a huge part of our program and what we do and I’m proud of the way the guys battled hard and relentless just trying to pick it up for Pecs.”

Then, with less than two minutes to go in the third period, Tim Clifton broke the tie. Clifton banged in a rebound for the game-winner.

“You know, I was kinda just trying to be a body in front of the net and let Tanner [McMaster] and Sorren [Jonzzon] dig it out and hope they just get it there, and they did. It just popped out and I whacked it and it went in. It felt great.”

Quinnipiac goalie Michael Garteig recorded 18 saves on the night. Garteig turned in his second-straight shutout with the win.

“They’ve got some big bodies, so they’re pretty good at crowding the net and getting in my way but I was just trying to see around them and see the puck,” Garteig said. “If I didn’t see, my team was there to bail me out.”

Quinnipiac improves to 5-2-1 on the season with the win. The Bobcats are back in action on Friday, as they travel to Union for a 7 p.m. start.