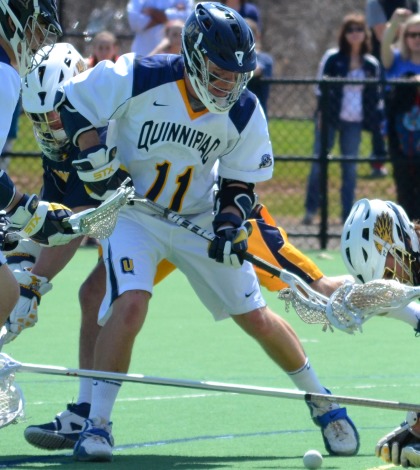 Webster, who graduated from Quinnipiac last spring, inked a one-year deal with Toronto. The deal includes the opportunity for Webster to make the team’s final roster when camp opens in December.

“It’s been a lifelong dream to play for the Toronto Rock,” Webster told The Chronicle. “I grew up going to every Rock game with my dad. And I’ve watched them win so many championships, so it’s nothing short of a privilege to be joining the franchise.”

The National Lacrosse League is a nine-team league professional lacrosse team based out of North America. Formed in 1986, the league features teams from Buffalo, Calgary, Colorado, Edmonton, Minnesota, Philadelphia, Rochester, Toronto and Vancouver.

With 77 career goals, Webster ranks No. 7 all-time in Quinnipiac program history. The native of Brampton, Ontario scored 26 goals to go along with eight assists during his senior season in 2013-14, trailing only Michael Sagl and Ryan Keenan for most individual points.

“The time I spent at Quinnipiac was not just improving my lacrosse skills and athleticism, but more so personal accountability,” Keenan said. “Quinnipiac taught me responsibility and developed me into the person I am today. Coach Frady and Coach Fek always stressed the importance of looking after your teammates before yourself.”

Webster recorded double-digit goals in each of his four years at Quinnipiac. With 103 career points, he’s the 11th member of the 100-point club at Quinnipiac.

This past summer, Webster played for the Brampton Excelsiors of Major Series Lacrosse, tallying nine goals in eight games.

“My time in Brampton helped me fine tune all my skills required to master the indoor lacrosse game,” Webster said. “Growing up in Brampton allowed me to gain all the fundamentals required to play at the elite level.”

Toronto opens up its season Jan. 3 when it faces Rochester.