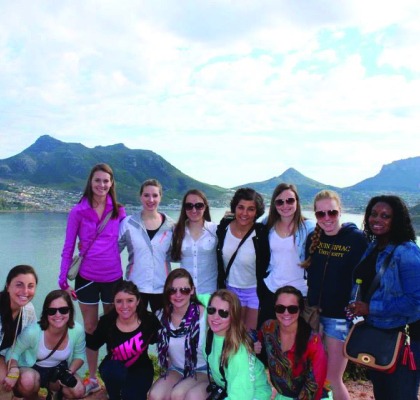 A QU 301 trip to Cape Town, South Africa inspired a group of students to reach out to those struggling in the Hamden community.

The students decided to create a club to support Hamden, just like they helped communities in Cape Town on their trip in May 2014.

Senior health science major Ashley Hiep is one of the students involved with the club.

“While we all wish we could travel back to South Africa, we have learned you don’t need to travel halfway across the world to help,” Hiep said. “There are people right here in Hamden who need our help.”

Junior Catherine Toma, one of the other students who went on the trip, said the experience opened her eyes to how she could use the tactics she learned in South Africa to help the Hamden community.

“The mission of the QU 301 program is sustainability,” Toma said. “[I’ve learned] the ultimate way to affect others is by empowering them. By providing people with the resources to help them help themselves, change can truly be initiated within a society.”

Although Campus Life has not yet officially approved the club, the students hope to name it the “QU South Africa Student Association,” according to Toma.

Once the university recognizes the club, Toma said they want to raise funds and awareness for the disadvantaged communities in South Africa, as well as local communities surrounding Quinnipiac.

The club would not only benefit the surrounding communities, but the students at Quinnipiac as well, according to Toma. She said Quinnipiac students too often become lost within their own “bubble” and they forget to get to know others in the community outside of Quinnipiac.

Junior biology major Stephanie Hurd joined the club after travelling to South Africa for QU 301, and said she agreed with Toma.

“Many of us know so little of the greater world around us and we miss out on so much,” Hurd said. “I want to learn as much as I can so I can better understand and relate to my fellow global citizens.”

“Once more relationships are established, the local community will benefit from projects put together by the Quinnipiac community,” Toma said.

The club and St. Ann’s is hosting an event on Saturday, Nov. 15. Toma said the event would provide clothing bins for those in need within the Hamden community and is set to take place in the St. Ann’s parking lot. They planned the event to mimic “street shops” seen on the streets of South Africa.

“Hamden has given Quinnipiac a lot, so it is important to remember this and help where we can,” Toma said.