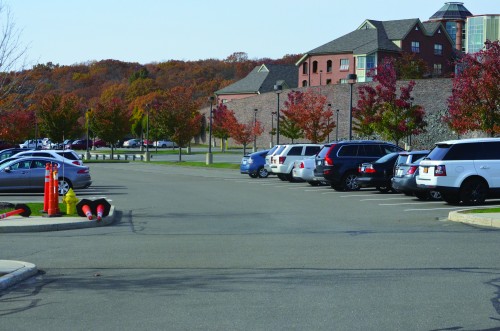 Quinnipiac allows tailgating at specific athletic games, but the average student cannot host one. Only parents and university-approved organizations are eligible to host tailgates at this time, according to Chief of Public Safety David Barger.

“We were trying to move tailgating forward ever since we opened the TD Bank Sports Center in 2007,” Director of Athletics and Recreation Jack McDonald said.

But tailgating isn’t only for fundraising. Parents are able to host what the guidelines refer to as family picnics at events. Parents have tailgated at lacrosse, softball, rugby and soccer games, in the past, according to Barger.

Sophomore Jessica Lobel was excited about the idea of tailgating.

“I had no idea students were allowed to tailgate,” Lobel said. “It’s a great way to get excited for the game. It would bring the students together in a fun, social setting.”

While students are allowed to attend hosted tailgates, they are expected to follow guidelines that are posted on the quinnipiacbobcats.com website.

The guidelines say tailgates can only occur for two hours prior and one hour after each game, according to the the website. But, for games that begin after 5 p.m., organizations and parents can only tailgate before the game, not afterward.

The university will supply grills for tailgating, but the organizations must provide their own lighter fluid, charcoal and food, Barger said.

University organizations looking to raise money are typically the ones hosting tailgates, according to McDonald.

“When we have a student organization involved, we want to make sure they’re well informed,” Barger said.

Students should be aware that the guidelines forbid the usage of propane tanks, possession of beer kegs, alcohol or paraphernalia and drinking games.

The main reason for strict guidelines is to keep all involved with tailgates safe, according to Barger.

Students who do not follow the guidelines will be properly disciplined, McDonald said.

“If there [were] a breach of any of those guidelines, we would enforce [university policies],” Barger said. “Residential Life would handle punishment.”

As time goes on, McDonald said he hopes tailgating opportunities will be extended to all students without university approval. But, he said the university must first see the responsibility of the students before extending this privilege.

Junior Joseph Verducci agrees with McDonald and believes the university should be more lenient with their tailgating allowances.

“If they let all students tailgate, more students will want to attend games,” Verducci said. “They should have more faith in students and broaden their guidelines.”

McDonald said he hopes tailgating can become a Quinnipiac custom and not an excuse for rowdiness and excessive alcohol consumption.

“We’re hoping to get tailgating to become a tradition at Quinnipiac,” he said. “[Tailgating is] celebrating being a Bobcat.”