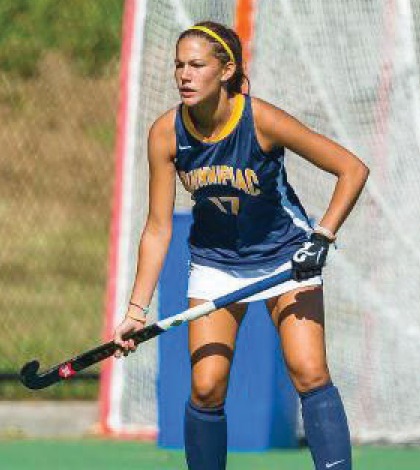 For freshman forward Gemma Cirera, becoming the first Quinnipiac women’s field hockey player to come from Spain is just one of the many things she’s done.

Cirera’s journey to the turf went through the classroom, the dance floor and the waters of Galicia—all while learning English as a second language.

And at times, it hasn’t been easy.

“I felt like this was not my place at first because I was so lost and I could not perform as I did in Spain,” Cirera said. “I think I need more confidence in myself, but I am gaining it.”

Cirera was born and raised as an only child with her father Josep Cirera and mother Sara Gutierrez in Terrassa, Barcelona. As part of the curriculum in her area, students had to play as many sports as possible.

“When I was little, I played five sports a week,” Cirera said.

With many sports at her disposal, Cirera was introduced to field hockey by her parents at a young age. It was not long until she made field hockey her primary sport.

“In my town, field hockey is popular,” Cirera said. “We have four clubs. My father used to play field hockey. When I was 4, my parents joined me in a club. We played a lot of sports, and when I was 6 or 7, we had to choose one sport and I chose field hockey.”

Although Cirera chose field hockey as her major sport, she continued to stay involved with her other passions.

“Since I was little, I was dancing all types of dance,” Cirera said. “I am more active, so I did not feel like doing ballet. I tried [hip-hop] one year and the next year I was selected to join a competition crew. I was in the crew one year and it was amazing.”

Along with competing in hip-hop, she also tested her individual talents on the beach. Cirera participated in an amateur surfing contest in Galecia on the east coast of Spain one summer.

Despite taking time away from field hockey to test the waters of other sports, Cirera found some transferable skills to take to the turf.

“In dancing, I gained coordination in my feet and with my crew,” Cirera said. “You can translate it to working with a team. In surfing, you need a lot of balance and strength in the arms.”

“I only played one year against all of the upper-level competition because I was young,” she said. “I was playing against 30-year-olds, so it was shocking. They had a lot of experience that I did not have and it made a difference. But it was a good experience.”

The wealth of talent in Spain did not go unnoticed by Quinnipiac women’s field hockey head coach Becca Main. Main said conference opponent Rider always had good Spanish players on its team. Because of this, Main went on her own search to find a suitable Spanish player.

“We have other foreign athletes from South Africa and from Germany, Belgium and the Netherlands,” Main said. “The Spanish players have a different style. We started looking at three Spanish players and [Cirera] was the one that came out on top for us in terms of someone we thought would fit here.”

In her first season on the team, Cirera admitted that some of the adjustments to a new school and country have affected her play on the field.

“Personally, I think I am not doing my best because it is so hard to come here with a language that you do not know,” she said.

Cirera is also trying out a new position this year. She now is a forward, instead of a defender. Main said communication is the prime reason for the switch in position for Cirera.

“She has been incredibly adaptable,” Main said. “She came to us as a defender, so all her life she played in the back. We moved her to the forward line in order for her to be able to free-think and do her own thing.”

Despite the struggles, Main has seen improvement in Cirera’s early career at Quinnipiac.

“Off the field is the hardest thing,” Main said. “On the field, it is almost like anything you do. You understand the language in the sport. She is actually very easy to coach. You do not have to say much. The team has been very good in being very minimalistic in terms of what words they use with her.”

Along with balancing field hockey and the adjustment to a new country, Cirera is pursuing a major in film, video, and interactive media. Cirera is enthusiastic about the opportunities for FVI students in the school.

“I am so excited,” she said. “Next semester, I will be working with cameras that were not allowed in Spain. There, it was all written assignments and we did not touch cameras until the third year.”

As the season comes to a close, Cirera looks to continue making a full adjustment to life at Quinnipiac.

“Right now, we are very much able to see her click on the field and do very well,” Main said. “I think the hardest transition is the language, the academics, and being able to understand what is being said around her.”