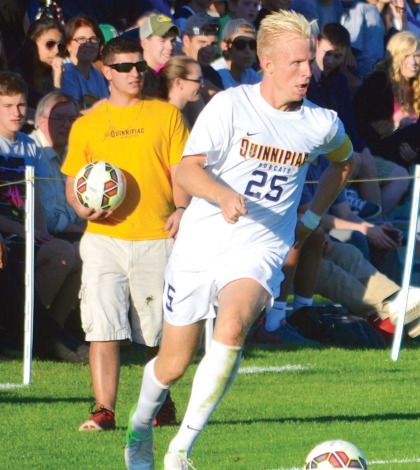 Soccer has always been a part of Tobias Esche’s life.

Born into a family of athletes, Esche’s parents encouraged him to play sports at an early age. He chose soccer.

“My parents wanted me to be active and to socialize, so I started playing soccer when I was four years old,” Esche said. “My father played the game and taught me some skills, and I routinely played with my sister.”

Although Esche enjoyed the sport during his childhood, he did not develop a love for the game until his teenage years.

“I fell in love with soccer when I was 13 years old,” he said. “I played soccer with my friends on a daily basis after school and began dreaming about becoming a pro. It’s a feeling I have never lost and never will because I love the game.”

Driven by his passion for soccer, Esche landed a spot on a German association football club, FC Oberneuland. As a captain on the team, Esche helped Oberneuland win two Bremen Cups. Esche also played for the Team Bremen U21 squad.

For Esche, succeeding in soccer while living in his homeland was nice.

“I never thought about coming to the United States or anywhere to play soccer,” Esche explained. “I enjoyed my home life and had everything I needed.”

However, a friend of Esche suggested moving to America to play soccer and receive a good college education. That friend started contacting schools in the United States.

“I was interested in the idea of playing soccer and getting a college degree at the same time,” Esche said. “It’s very hard to do that in my homeland. You’re basically given two choices. One option is to play soccer at a very high competitive level and forget about studies. Option two is focusing mainly on studies and play soccer on a low, non competitive, mediocre level.”

In 2012, Esche committed to the University of North Carolina. At the time, he was unaware of the UNC brand and its popularity across the nation.

“Coming from Germany, I was unaware of how big the Tar Heel name was,” Esche said. “I loved the idea of playing for a widely known university, but I did not know about that until I attended the school.”

However, Esche’s experience at UNC was a brief one. He was sidelined the entire year due to injury, then transferred into Quinnipiac for his sophomore season.

Although he had many options, Esche joined the Bobcats because of its Quinnipiac men’s soccer head coach Eric Da Costa’s outlook on the program.

“During the recruiting process, coach Da Costa said it was important to fit into the group and become one of the guys,” Esche said. “He knew I could play soccer, but he stressed that getting me involved with my teammates was essential.”

Da Costa’s message, and Esche’s teammate’s—who welcomed him with open arms—made the transition as smooth as possible.

“I love it here. My teammates helped me adapt quickly and took me in as one of the boys,” Esche said. “Some people think our team is too close. Students on campus always joke that my teammates and I are always around each other. But, I like it that way because this team is filled with a good group of men.”

Esche has also enjoyed great success on and off the field for the Bobcats.

“Tobias is a great leader, he is everything you want in a leader,” Da Costa said. “He leads vocally and by example. He’s consistent in terms of attitude and how he approaches training. He gives 100 percent effort, intensity.”

Esche’s solid campaign helped lead the Bobcats to their first Metro Atlantic Athletic Conference Championship, which he believes is a small stepping-stone to bigger accomplishments.

“Winning the MAAC Championship was very important for the school, team, and for me as a player,” he said. “It’s huge for us to win the tournament, and it is something to be proud of. But, our loss in the first round of the NCAA tournament left a bad taste in our mouth, making us want to achieve something greater.”

Esche has used the 2-1 loss to Connecticut in the NCAA tournament as motivation for this year, setting larger, bolder goals for Quinnipiac.

“When I came to the United States my goal was to win a national championship,” Esche said. “My main goal is not to win the MAAC Championship. Our team wants to make a run in the NCAA tournament. Nobody can take away our MAAC title, but that’s over.”

Quinnipiac currently has clinched the No. 1 overall seed in the conference with Saturday’s 2-1 win over Iona, and Esche believes this year’s squad can reach its ultimate aspirations of heading back to another national tournament.

“I’m confident in our abilities and think we’ll achieve something big this year,” Esche said. “Our mindset is to focus one game at a time.”

Whether or not Quinnipiac accomplishes its goal of winning the national championship, Da Costa knows Esche’s presence has helped the team immensely and believes Esche could play the sport professionally upon his graduation.

“I prefer not to think about where we would be without Tobi,” Da Costa said. “There’s no doubt that Tobi’s inclusion into this team definitely helped us to get to where we’re at. We had some success before Tobi joined our team, but Tobi is a big reason why we’re so strong defensively. I’m glad he’s here and part of our success.”