Jack McDonald to retire in June 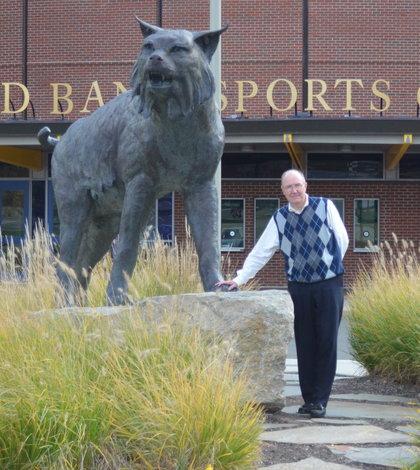 The thought of retirement first crossed Jack McDonald’s mind during his drive back from his cottage in Marshfield, Mass. this past summer.

McDonald drove toward Hamden with his wife, Linda, when he realized for the first time that he didn’t want to leave his summer home. The 63-year-old didn’t want to come back to work.

“I’m blaming that cottage,” McDonald said with a laugh. “It’s been an unbelievable journey, but it’s just time.”

The 2013-14 Under Armour Athletic Director of the Year added that six of his brothers and sisters are only a short bike drive from the cottage he plans on retiring to, and that he plans on spending as much time with them as he possibly can.

“I’ve always been a big family guy,” he said. “The dots just connected, and I think it’s the right situation.”

During the two decades under McDonald’s guide, Quinnipiac has ventured its way into Division I athletics and constructed the TD Bank Sports Center, among other accomplishments.

And come next fall, Quinnipiac will have to enter an athletic season without McDonald at the helm for the first time since 1995.

“I’ve had a blast, I really have,” McDonald said. “But athletics is a grind, it’s really for the young people.”

McDonald says he’s sure the university has thought about who his replacement will be, and that he’s positive it will be a “first-class search.”

“I hope they look into hiring from within,” McDonald said. “Personally, I think Billy Mecca and I have been a tag team forever, so I hope he gets a good look.”

“I do a lot of the external stuff, so you could make the case that Billy’s more of an athletic director than I am,” McDonald said.

The native of Braintree, Mass. informed all of the athletic department’s employees of his decision to retire last Wednesday during their weekly staff meeting.

Having staff meetings every Wednesday morning is something McDonald instituted when he was the athletic director at the University of Denver from 1990-1995, in order to “build a family-like bond between all of the members of the staff.”

And at Quinnipiac, those meetings were often his favorite time of the week.

“I have those meeting every week not to hear myself talk, but to get the members of the staff talking with one another,” McDonald said. “The side meetings that happen between all of the coaches is such a great thing.”

But this past Wednesday, McDonald did most of the talking.

“They were all shocked, McDonald said. “Telling them was rough. It weakened me in the knees a bit to see how much they cared.”

Once he finished speaking, members of the staff rose and gave him a standing ovation.

“Words cannot fully explain the magnitude of Jack’s impact on our QU athletic department,” Quinnipiac field hockey coach Becca Main said. “He has set the tone in terms of unity among staff and administration, he branded our university in navy and gold, he has supported coaches and teams wholeheartedly through adversity and numerous championships.”

“He has put QU athletics on the map nationally.”

McDonald has guided the Bobcats to 28 conference championships during his tenure at the university.

Most of all, though, McDonald said getting to know people he works with has been the best part of his time in Hamden.

“He is more than just a boss because he cares about the coaches, staff and student-athletes on a personal level,” women’s lacrosse head coach Danie Caro said. “Everything he does comes from a genuine desire to see everyone at Quinnipiac succeed as they pursue their dreams.”

McDonald made the biggest move of all in 1998, when he helped transition athletics into Division I status.

“Jack has been essential to the University’s growth,” men’s basketball head coach Tom Moore said. “His hard work, unwavering dedication, and loyalty to Quinnipiac have driven the athletic department throughout his time here. He ushered Quinnipiac Athletics from Division II to Division I status with grace, class, and professionalism.”

And when he talks about the athletes he’s helped guide over the years, McDonald often jokes that he has “450 children.”

And since then, the men’s ice hockey team has continued to grow into the national force that it is today – ultimately reaching the 2013 Frozen Four under McDonald’s guide.

“I can just remember turning to my wife and saying, ‘Linda, I can’t believe we’re actually going to the Frozen Four,’” he said. “It was a special moment.”

McDonald also added that hosting the Women’s Frozen Four at the TD Bank Sports Center in 2014 tops his personal list of accomplishments.

“It was the best athletic thing I’ve ever been involved in during the 35 years of intercollegiate athletics,” he said. “All of the campus departments had a hand in hosting it, and it was amazing.”

“You’re only as good as your boss in any career you have, and I can’t say enough about what President Lahey has done,” McDonald said. “He’s the one that should get all of the credit. You’re going to have to print a 2,000 word paper when retires because of everything he’s accomplished.”

McDonald recalls visiting Quinnipiac for an interview with Lahey in 1995, and leaving the meeting with a strange feeling of excitement.

He was currently in the midst of his fifth year as the athletic director of the University of Denver when he flew back to Boston to tour Quinnipiac.

McDonald remembers talking with Lahey during the interview about a transition into Division I, about building larger athletic facilities and even about making hockey a more competitive sport at the school.

“And we’ve done all of that,” McDonald said with a slight smile, leaning back in his chair at his TD Bank Sports Center office. “It’s been quite the ride, hasn’t it?”