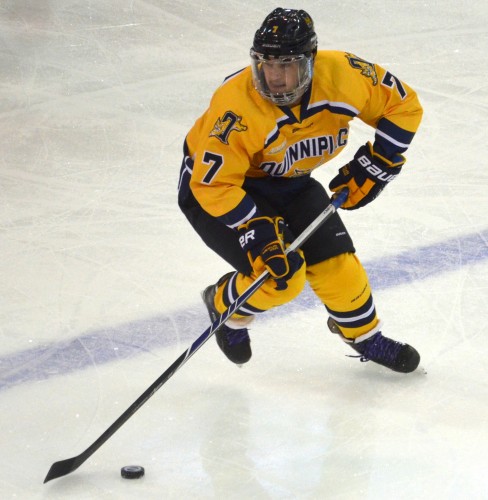 After downing Northeastern 3-2 on Saturday night, the Quinnipiac men’s ice hockey team had little rest before heading out on the ice to try and build its first winning streak of the young 2014-2015 season.

But rested or not, the Bobcats got the job done.

Quinnipiac earned a 4-3 come-from-behind victory over the Huskies in the second part of a home weekend series at High Point Solutions Arena on Sunday afternoon.

“We are ecstatic for the win today and the sweep on the weekend,” Quinnipiac head coach Rand Pecknold said. “It wasn’t our best hockey, but we were down 2-0 and we battled back and had great energy. We showed some pretty good compete today.”

Quinnipiac trailed early, as Northeastern’s Mike Szmatula scored two goals in the first period to give the Huskies a 2-0 advantage.

Then, before the second period, Pecknold decided to put Landon Smith on the first line with Sam Anas and Matthew Peca to try and generate more goal opportunities.

Quinnipiac came out on fire in the second period, as Smith netted his third goal of the season just 23 seconds into action.

“Sam took a shot on the net, I was just lucky enough to be backdoor and put it home,” Smith said on the goal. “I felt very fortunate to be out there with them [Anas and Peca]. They are two great hockey players and we have such great chemistry together.”

Sam Anas was credited with an assist on the goal, and is the third fastest player in Quinnipiac program history to reach 50 career points. The feat took Anas 46 games.

“I didn’t even know about it until I saw a tweet after the game,” Anas said. “It felt good but the team’s success comes first and little things like that just feel good.”

Smith then scored again with 9:31 remaining in the second stanza, tying the game 2-2.

“Lando has been great. I love the way he takes accountability,” Pecknold said. “I love his game. He knows he has deficiencies in his game and all he does it work at it. And he gets better and better. The talent is there; when he competes he is one of the better freshmen in our league.”

Northeastern battled back to retake the lead with 9:00 remaining in the second period. But again, Quinnipiac answered with a goal to tie the game.

With 1:07 remaining in the period, Andrew Taverner found the back of the net to knot things up 3-3.

In the third period, Quinnipiac would take the lead for its first time all day. Junior forward Soren Jonzzon netted the eventual game-winning goal with 15:01 remaining in the final period.

“Soren had a big one on us at the end,” Pecknold said. “He battled the last couple of years to get into the lineup and he is finally getting into it as a junior and he came up big for us tonight with that huge goal.”

With the win, Quinnipiac improves to 3-2-1 on the season.

“We need wins,” Pecknold said. “We are young. We just have to get wins. It was big especially heading into ECAC games.”

Quinnipiac looks to continue its winning streak on Friday at High Point Solutions Arena in Hamden, as it plays its first ECAC conference game against Colgate. Puck drop is set for 7 p.m.