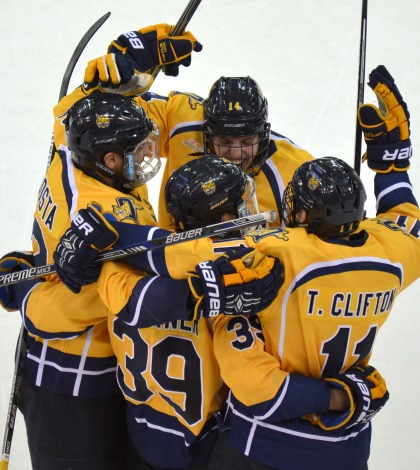 After falling to Connecticut 4-1 on Oct. 21, 10 days of rest may have seemed like an eternity for the Quinnipiac men’s ice hockey team.

Especially for junior goalie Michael Garteig—who was pulled during the first period of action in the loss and then re entered later in that game at Webster Bank Arena.

However, things were much different on Saturday night at High Point Solutions arena.

Garteig made 20 saves and the Bobcats scored three second-period goals en route to a 3-2 victory over Northeastern, snapping a three-game winless streak in the process.

“I think [Garteig] was really good,” Quinnipiac head coach Rand Pecknold said. “He looked sharp. I thought he was one of our best players, which is kind of what he did last year for us.”

Garteig only allowed two goals on the night, one of which came during a 5-on-3 advantage for the Huskies.

“I thought we needed [a win] pretty bad,” Garteig said. “It felt really good. Honestly, just a big weight of the shoulders.”

Quinnipiac got on the board during the second period, as Travis St. Denis sent a one-timer from Devon Toews past Northeastern goalie Derick Roy with 13:16 left, giving the Bobcats a 1-0 advantage.

Then, less than a minute later, Toews netted a one-timer past the left pad of Roy, extending the Bobcats’ lead to two.

Northeastern’s would respond, however, as Garret Cockerill sent one past Garteig from the center of the ice, cutting the lead to one goal during the 5-on-3 power play.

Andrew Taverner reclaimed Quinnipiac’s two-goal lead at the end of the period, though, knocking in a one-timer from Derek Smith after Northeastern’s Adam Reid was called for cross checking moments before.

“The second period was great, it was phenomenal,” Pecknold said.

Kevin Roy, the Huskies leading scorer, put one past Garteig in a scrum in front of the net with 11:03 left in the third period, but Northeastern’s comeback fell short.

Garteig made a handful of important saves in the game’s final period, non bigger than the flurry of shots he stopped during the last two minutes in which Quinnipiac was on the penalty kill.

“Realistically, I think we were just a team that wanted this one pretty bad,” Garteig said. “We’re a team that shouldn’t be 1-2-1 to start a season.”

Quinnipiac is back in action again tomorrow against Northeastern. Puck drop is scheduled for 4 p.m. at High Point Solutions arena.