As the number of Ebola cases continues to increase around the world, the university is taking precautions to protect faculty, staff and students from the virus.

On Wednesday, Oct. 22, about 1,100 students participated in a workshop where they learned the latest information about Ebola and practiced using basic protective gear.

Dean of the School of Nursing Jean Lange said various faculty members started planning the workshop six days before it was held. The workshop was to prepare students and faculty about how to deal with something like Ebola. It included a one-hour information session, followed by a video demonstration and then a supervised practice of using protective equipment.

The protective measures taught at the workshop were not just specific to Ebola, but could apply to any infectious disease.

“The types of equipment that you would use in a real Ebola case are at a higher level of protection, but the principles are exactly the same,” Bruce Koeppen, founding dean of the Frank H. Netter School of Medicine said. “It’s common procedure, not specific with any infectious agent but it could deal with all of them.”

School of Nursing students were required to attend the training and medical students and other health science majors were highly encouraged to go. Koeppen said nurses are at the highest risk of coming into contact with Ebola.

“Any healthcare worker is going to be on the front line in all of this, but typically it is a nurse,” he said. “They’re the first contact that the patient has in the emergency department, so it’s important for them—if there is a suspicion of an infectious disease—to know how to interact with the patient in a way that protects them.”

The majority of the medical students did choose to attend the workshop, Koeppen said.

“They are currently not in clinical settings where they have a higher ability of being exposed and Ebola is already part of our normal curriculum,” Koeppen said. “But even though we cover it in the curriculum, the more you hear it, the better it sinks in.”

Since the majority of known Ebola cases in the United States have begun in the emergency room, Lange has changed clinical policies in the School of Nursing.

“If [students] were assigned to a unit but there was a suspected case [of Ebola] there, they would be reassigned,” Lange said. “We also decided not to have any of our students rotating in the emergency rooms of any of the hospitals because that’s where a lot of cases we know about have been coming in.”

Junior nursing major Samantha Vitale said she was disappointed to find out that students will not be doing clinical work in the emergency room for the time being.

“I don’t like it because—going to different units—that’s the exciting part,” Vitale said. “Right now we’re on a telemetry unit and it’s basic nursing, so when we get the chance to go out somewhere, then it’s fun.” 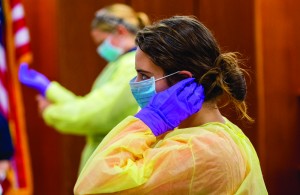 [/media-credit]Despite the preparedness workshop and the change in clinical policies, Lange said the chances of Ebola affecting the Quinnipiac community are slim.

“You have to be in pretty close proximity with someone who actually has symptoms so I think while it’s not impossible, it’s fairly unlikely,” she said.

Both Vitale and junior nursing major Jaclyn O’Shea said the university could do more to inform all of the student body about the dangers of Ebola.

“They should just really tell people, ‘stay clean, wash your hands,’” O’Shea said. “Anyone could get it; obviously we’re at a higher risk but everyone should know about it.”

O’Shea thinks there is more to the disease than we might know.

“They might just think it’s someone with the flu because it’s similar symptoms to someone that has the flu,” she said. “We could be exposed and not even know—that’s the scariest part.”