Greatness on the green 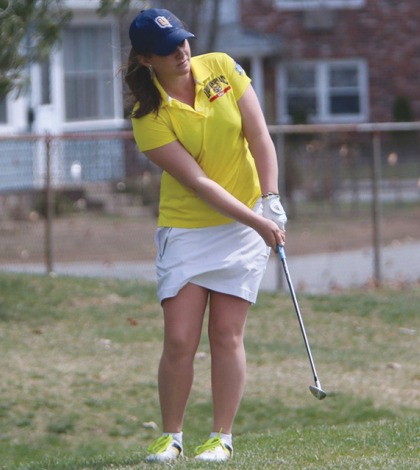 For Nicole Scola, golf has always been second nature.

“It gets to a point where you’re not even thinking about playing—it’s just kind of natural and it’s just flowing from you,” Scola said.

Scola’s record-breaking performance came in September of last season. A freshman at the time, Scola shot a 70 (-2) on the second day of the Dartmouth Invitational, a program record.

Scola said she was able to stay calm during the course of the competition, which helped her play well.

“When you start to play the first couple of holes well, it’s a great feeling,” Scola said. “There’s always that little voice in the back of your head saying you’re going to mess up at some point, but you just have to be ready for it. At Dartmouth, I never really had that ‘mess up hole.’ I didn’t really have any bad shots or blow-up holes.”

Scola also mentioned that a huge part of the record-breaking performance was being able to close out the second day.

“I remember coming into the final stretch of five holes,” Scola explained. “I birdied the last three or four, and I had my coach by my side. It was really exciting for me to have complete confidence in my game and have an internal feeling of knowing I would play really well.”

“That was very unusual,” O’Connor said. “I didn’t expect that of her; last year was an exceptional season. She’s a very capable golfer, and she’s No. 1 consistently on the team.”

The 18-hole record wasn’t the only record Scola broke that weekend.

She scored a 146 on the two-day 36-hole, breaking her own record of 154 during the Dartmouth Invitational.

Breaking her own record for a 36-hole score, though, didn’t make it any less significant.

“If you talk to any athlete, having your personal best is always the end goal,” Scola said. “My dad always says ‘it doesn’t matter how you play it just matters that you did the best you can.’”

The sophomore standout said topping her own score was just proof that her hard work is paying off.

“I can’t compare myself to other athletes, obviously,” Scola said. “I just want to strive for greatness. Trying to beat yourself and trying to improve is the point of sports. You never want to stay stagnant you always want to get better.”

The performance was good enough for a fourth place finish.

The sophomore added that the course played a pivotal role in her success.

“Golf is interesting because courses range and are very different in their layout, even how the wind plays into effect,” Scola said. “I’m probably the one [on the team] who loves Dartmouth the most.”

Scola said the 18-hole record was the most special, though both are important to her.

“I was a freshman, and it was very difficult for me to try and keep my nerves even,” she said. “So shooting that score was really great for me. It boosted my confidence quite a bit.”

Looking forward to the future, Scola said she was satisfied with the record, but is always trying to improve her game, which ultimately helps the team reach its ultimate goal.