University bans pets in the classroom 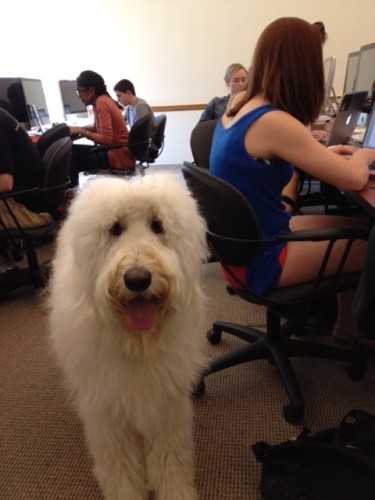 University employees are no longer allowed to bring their pets to work, as of Oct. 1.

The policy is similar to rules at other universities, and now all three campuses follow these new guidelines, Lori Musante, human resources business partner said.

“The intent of this policy is to provide a safe work environment for all university employees that is conducive to the university’s mission,” she said.

Journalism Professor Paul Friedman is disappointed with the new ban because he enjoyed bringing his dog to some of his classes.

“When I have brought my dog to my classes in the past my students loved it,” he said. “It creates a terrific atmosphere in class and students do just as much work as they would normally. “

On Oct. 8 there was a “Puppy Play Pen” where dogs were brought out onto the Quad for students to interact with an relieve stress during midterms.

Musante said the policy only pertains to employees bringing their pets to work and not to on- campus events involving animals. The policy also does not prohibit employees from walking their dogs on any of the three campuses.

Friedman believes dogs are therapeutic and relieve some of the stress that most college students are under. He finds it strange faculty can’t bring their dogs to work, but there can be an event held for students to therapeutically interact with dogs.

“I don’t see lots of dogs around campus and I think it makes for a pleasant change,” he said. “I know when I have brought my dog in the past, all I get is smiles and it makes people feel better. What is wrong with that?”

Sophomore Nicole Formato does not support this new policy and considers the “Puppy Play Pen” event a contradiction.

“Living on this campus can be very boring and a lot of people have animals at home, so being able to see dogs–or any animal–more often can make QU feel more like home and actually bring some life to this campus,” Formato said.

The exception to this rule is properly trained service animals.

English Professor Marianna Vieira is unsure of the difference between a pet dog and a service dog.

“I’ve never been able to understand how one dog, for example, is different from another,” Vieira said. “Wouldn’t service animals present the same risks as ordinary animals?”

Vieira said she believes the reason the policy was put into place was because of the fear of the “unsightly mess” an animal would cause. But she said she does not see the validity of this because all animals owners are responsible for cleaning up after their pets.

Vieira agrees there should be a “no pet rule” in the classroom, but professors should still be able to bring their dogs to work if they want to.

“No one needs distractions [in the classroom], and pets distract. Also, some people have pet allergies, and they should not have to worry about them in a classroom, or any workplace for that matter,” she said.

Formato believes legal restrictions could be put into place for bringing pets to campus instead of banning them from the workplace completely.

“As long as the dog or pet is trained, good with people and other animals, I don’t see the problem,” Formato said.