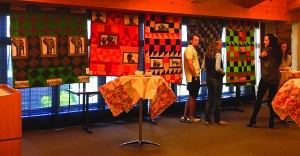 Imagine changing the lives of people from another country, thousands of miles away. That’s exactly what students involved with the QU South Africa program do.

The QU 301 Seminar class and the Alternative Winter Break program provide Quinnipiac students the opportunity to help others in struggling communities in South Africa.

Professor Peter Gallay facilitates the QU South Africa program on the Quinnipiac side, with support from the Department of Cultural and Global Engagement. As a QU 301 professor, his main goal is to provide insight and prepare students for their experiences in South Africa.

“It’s about the Quinnipiac community being able to support a community that is thousands of miles away,” Gallay said.

Gallay works closely with Tamarin Simpson, the Quinnipiac liaison in South Africa and the organization she founded called The Tippy Toes Foundation. Simpson said the slogan of the foundation is “people helping people.”

As Simpson assesses the community, she decides what needs to be done and prepares the Quinnipiac professors for their visits.

On average, student attendance for each trip ranges from 12 to 20 students, according to Gallay.

He said the purpose of the program is not only to provide students with the experience of learning the history and culture of South Africa, but to force the students to think about the differences between the two communities.

“The Quinnipiac students are able to interact with people [in South Africa] who are underrepresented,” Gallay said.

During the Alternative Winter Break trip, due to the reversed seasonal calendar, students help run a summer camp for students of Vaaijies Primary School. At this camp, Vaaijies students are able to participate in activities ranging from arts and crafts to a game of soccer with both Division I coaches from Quinnipiac.

But in order for Quinnipiac to continue to build athletic fields, repair houses and host summer camps in South Africa, money is key, according to Gallay.

“There’s some pressure on the students,” Gallay said. “If the [Quinnipiac] students aren’t able to raise the funds, we aren’t able to run the projects. I’ve had students say, ‘I wish we would have fundraised a little bit harder.’ But we do the best we can.”

Despite fears about the initial interaction between Quinnipiac students and Vaaijies students, Simpson said her worries faded after seeing the ways students from both sides interacted with one another.

“I was scared,” Simpson said. “I was worried about having these crazy Americans around the kids [because these were] interpersonal relationships between people from different countries who have absolutely nothing in common.”

But, much to her surprise, Simpson said the Quinnipiac and Vaaijies students quickly took a liking to each other.

“I was completely blown away,” Simpson said. “These [Quinnipiac] kids lowered their barriers; they weren’t worried about germs. They were hugging and kissing these kids.”

The bond developed between these students from different communities is a unique one, according to Simpson. But, of course, it isn’t just students from the Vaaijies Primary School that Quinnipiac supports.

The QU 301 and Alternative Winter Break programs help women in Cape Town, South Africa. Quinnipiac students help teach the women how to quilt and provide them with the proper materials.

In doing so, Quinnipiac provides these women the opportunity to sell their quilts to save money and change the lives of themselves and their children, according to Simpson.

“I get so emotional,” Simpson said. “No one understands the hard work and the journey that it has taken to get here. These women have nothing. And these women are now empowered. That was never an option before.”

Simpson said the impact the Quinnipiac students have on the people in the South African community is everlasting. The departures from South Africa are never easy on either side.

“When students come back, they have a different mindset about the community they worked with,” Gallay said. “[They] come back with the understanding that we’re all similar, we just have different opportunities that set us apart.”