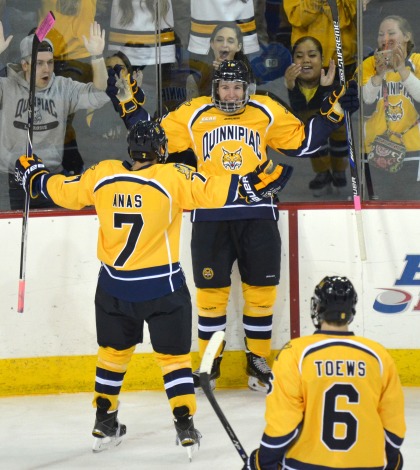 Following its 6-3 loss at UMass-Lowell on Friday, Quinnipiac men’s ice hockey came into Saturday game seeking to return the favor and finish the weekend series at one win apiece against the River Hawks.

The Bobcats came up just a bit short, though, and tied UMass Lowell 3-3 in the second part of a home-and-home series at High Point Solutions Arena Saturday night.

“We deserved a better fate,” Quinnipiac head coach Rand Pecknold said. “We played well enough to win. We just couldn’t put it away.”

Freshman goalie Sean Lawrence, who started his first career game, gave up two goals in the first period. He later settled in to only allow one goal throughout the rest of the night.

“I wanted to give the kid a shot,” Pecknold said on choosing to start Lawrence. “I thought he was pretty good. [I’m] sure he wanted to have that last one back.”

“I was a little nervous,” Lawrence said. “I tried to settle in. Once I settled in, our team played awesome. The team made it pretty easy for me to play my first game.”

The freshman scored a power-play goal to tie the game with 5:12 remaining in the first period.

After UMass Lowell retook the lead, Justin Agosta scored another power-play goal, his second goal of the year, to tie the game 2-2 with 16:21 remaining in the third period.

Smith then gave the Bobcats their first lead of the night when he scored his second goal of the game with 8:54 remaining in the third period.

“Honestly I couldn’t take the credit for either of those goals,” Smith said. “I was on the ice with some really good hockey players. I was just fortunate enough to be at the right spot at the right time to put those two goals in.””

After UMass Lowell tied the game with 1:18 remaining, neither team scored in the overtime period.

The Bobcats look to rebound against Connecticut on Tuesday night at the Webster Bank Arena in Hartford. Puck drop is scheduled for 7 p.m.