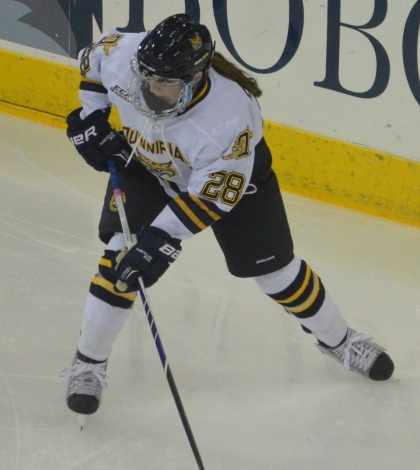 The Bobcats did just that, downing Maine 2-0 in the second half of the weekend double header at High Point Solutions Arena. improving to 4-0-1 thus far in the 2014-15 season.

“I think this is the best [team] we have had at Quinnipiac,” Quinnipiac head coach Rick Seeley said. “We have three lines that are able to go out and produce opportunities. We aren’t finishing a lot yet, but I think all three lines are moving well offensively.”

Freshman T.T. Cianfarano scored first, finding the back of the net just over five minutes into the third period to give the Bobcats a 1-0 edge. Cianfarano netted her 5th goal of the season off a wrister on a breakaway. She now has six points in five games.

For Cianfarano, it is the freshman’s third game-winning goal in just five games as a Bobcat.

“I come in to work hard, and get better each day, and by using all the resources Quinnipiac offers us just makes everything a lot better,” Cianfarano said.

Nicole Connery then scored an empty-net goal to put things out of reach, as Quinnipiac improved to 4-0-1 on the season.

“Our defense has been really solid this year,” Seeley said. “And Chelsea just continues to play better and better.”

The Bobcats play their next game on friday at the University of New Hampshire.